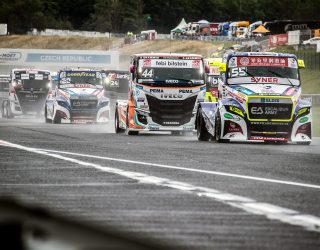 The 2021 FIA European Truck Racing Championship commences its season with the opening
rounds being held at the Hungaroring circuit this weekend, 12th &amp; 13th June.
16 drivers have committed themselves to the full season which consists of eight rounds in seven
European countries.

With no title awarded during the Covid –hit 2020 campaign, the 2019 Champion Jochen Hahn will
be looking to add to his 6 race victories at the Hungaroring circuit but he will face stiff competition
from former Champions Adam Lacko, himself a six-time FIA ETRC race winner in Hungary and local
favourite Norbert Kiss who won three rounds last year at his home circuit before the season was
curtailed taking his tally to seven victories at the circuit located just outside Budapest.
Race fans will finally get the opportunity to attend a live meeting although at a reduced capacity
due to the pandemic restrictions in place but there will be plenty of action for them to follow and
for those unable to attend, for the first time fans will be able to follow all of this season’s racing
action live via the official fiaetrc.com website, YouTube and social media channels.
Live Broadcasts will start with qualifying and super pole followed by the two races on Saturday
12th June and the same format for the action on Sunday 13th June.

There is additional interest in this season’s Championship, Steffi Halm, regarded as one of the
World’s best female truck racing driver’s and a previous race winner at the Hungaroring will be
joined on the grid by Aliyyah Koloc who, at the age of 16 became the youngest ever FIA ETRC
entrant last year and she will be hoping to gain further experience in this year’s Championship.
British interest in the Championship is in the entrants of the Apollo Tyres Tor Truck Racing Team
with 2018 Grammar Cup Winner Shane Brereton at the helm, Jamie Anderson the former rally
the driver will be hoping to build on some promising results prior to last year and there is a new
entrant, Tom O’Rourke with his MV Commercials MAN making his debut in the Championship.
Timings for the Live Streaming are below:
Saturday 12th June
11.30 – 12.15 Qualifying and Super Pole
13.35 – 14.40 Race One
15.35 – 16.40 Race Two
Sunday 13th June
10.15 – 11.00 Qualifying and Super Pole
12.25 – 13.30 Race 3
14.25 – 15.30 Race 4 Timing is Local / CET

Here is the link to the YouTube live stream: