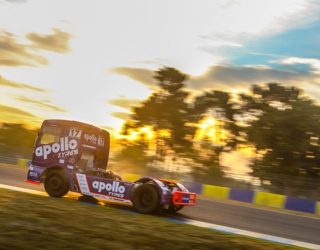 The 2021 FIA European Truck Racing Championship heads to Spain and the Jarama Circuit for the fifth and penultimate round of this season’s championship on the 2nd and 3rd October 2021.

The Apollo Tyres Tor Truck Racing Team took full advantage of Teo Calvet’s absence from the last round at Le Mans to record three race wins and a third-place podium to secure 58 points from a maximum 60 points available to hold a 35 point lead going into the penultimate round of the series in Jarama this weekend. Steffen Faas and Jamie Anderson are separated by only nine points in the battle for third place.

The results at the Bugatti Circuit lifted the Apollo Tyres Tor Truck Racing Driver, Shane Brereton, to joint 6th with Steffi Halm in the overall championship standings after securing 22 points for his efforts at Le Mans as the team enjoyed their most successful weekend of the series to date.

Going to Jarama it is the Hungarian driver Norbert Kiss who leads the way in the Championship on 179 points, 26 clear of his nearest challenger Sasha Lenz with Adam Lacko a further 3 points back in third place. Of these three drivers only Lenz has yet to taste glory on the top step of the podium at Jarama, Kiss has three victories and Lacko two as they battle to be crowned FIA ETRC Champion comes down to the final two rounds of the season.

The Apollo Tyres Tor Truck Racing Team driver Shane Brereton is looking forward to the Spanish race, ‘We have found throughout the season we get better as the weekend progresses, I feel I need to up my game in qualifying sessions, I am not quite showing the true potential of the truck perhaps I am mindful of what is required of me but it is so important to get a good qualifying position as it can make our judgement for the race that much more precise’.

Brereton added, ‘I am looking forward to Jarama, hopefully, we shall continue to be competitive and for our fans, we shall have the live cam onboard the Apollo Tyres Tor Truck Racing MAN so that our fans will have an opportunity to see the action as I see it’.

‘We have maintained all season that we wish to be competitive and we are not changing that mindset at this stage of the campaign, the aim is to obtain as many points as possible in the Championships we are registered for and that will be our goal at Jarama’.