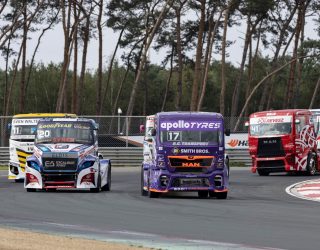 The 2021 FIA European Truck Racing Championship heads to France for round 4 of this season’s Championship this coming weekend 25th-26th September 2021.

Le Mans is the venue staging a complete weekend of truck racing which generates large crowds flocking into the circuit for the event, not only are the FIA European Truck Racing Championship competitors in town but also what is now going to be the Final Round of the French Truck Racing Championship following the announcement of the cancellation of Le Castellet in early October.

Seven of the drivers have all tasted success on the 4.273km Bugatti Circuit since 2016, Jochen Hahn leads the way with five victories, Steffi Halm has three wins under her belt, two each for Adam Lacko and Andre Kursim, whilst Norbert Kiss, Antonio Albacete and Sasha Lenz have also taken the top step of the podium.

This season Norbert Kiss heads to France with a 14 point advantage over Adam Lacko with Sasha Lenz a further 4 points back in third place.

In the ‘Goodyear Cup’ standings for Chrome rated drivers, Teo Calvet with seven race victories from the last eight heads the table 23 points clear of the Apollo Tyres Tor Truck Racing Team and Shane Brereton. Jamie Anderson and Steffen Faas are separated by only three points in the battle for third place.

This weekend Calvet is committed to the French Championship and will not contest the FIA ETRC rounds, giving an opportunity to the chasing pack to close the gap to the young French driver and with 60 points at stake over the weekend it is all to play for.

The Apollo Tyres Tor Truck Racing came away from the last round in Zolder with a positive outlook having secured points in each of the four races to leave Shane Brereton in 9th place in the main Championship and second in the ‘Goodyear Cup’ standings trailing Teo Calvet by 23 points going into this weekend’s series of races.

The Apollo Tyres Tor Truck Racing team driver was quick to admit that the Class battle is still very open after another blistering performance from Teo Calvetwho followed up his successful weekend at Most, with four race wins in the ‘Goodyear Cup’ at the Belgian Circuit.

‘We were playing catch up after the penalty in the first race at Zolder‘, was Apollo Tyres Tor Truck Racing Team pilot Shane Brereton, ‘The Goodyear Cup is not a straight fight between Teo and the Apollo Tyres Tor Truck Racing team, Jamie (Anderson) and Steffen (Faas) are poised to step in if either of us make mistakes, it is a very competitive series this season and if Luke Garrett can keep improving and the reliability issues are sorted he could play a major part in the final few rounds.

‘Looking ahead to Le Mans we know how important qualifying is for the main Championship Races and we will be looking to continue our improvements in this area, we reached the Superpole sessions in Zolder and we aim to repeat that in Le Mans’, the Apollo Tyres Tor Truck Racing team driver concluded.

Live Broadcasts will start with qualifying followed by the two races on Saturday 25th September and the same format for the action on Sunday 26th September.

Timings for the Live Streaming are below: FIA ETRC Live Link or Fleet Speak website link on youtube