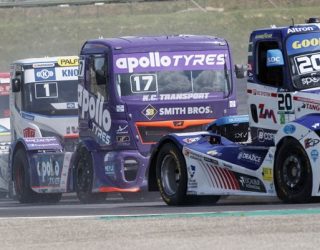 The 2021 FIA European Truck Racing Championship makes its way to the Czech Republic and the Most Circuit this coming weekend 27th -29th August 2021.

The Apollo Tyres Tor Truck Racing team lead the Goodyear Cup standings and for driver Shane Brereton a return to Most brings back some great memories.

‘I enjoy the Most circuit a lot, I have great memories from previous events when, in 2017, the team secured an outright race victory here in the final race of the event. The winning margin was close to 10 seconds if I recall from the Buggyra of David Vrsecky with Steffi (Halm) holding the final podium spot’.

Brereton added, ‘The Apollo Tyres Tor Truck Racing MAN has undergone a few tweaks since Hungary, these were made for the cancelled Nurburgring event but we shall see if the intended improvements materialise here in the Czech Republic’.

‘The team are looking forward to hosting our Polish guests from Apollo Tyres and giving them a race day experience to enjoy and savour as we continue to operate under a covid protocol’.

Race fans will finally get the opportunity to attend a live meeting although at reduced capacity due to the pandemic restrictions in place but there will be plenty of action for them to follow and for those unable to attend, following the success of the coverage at Hungaroring in the opening round of the season, fans will be able to follow all of this season’s racing action live via the official fiaetrc.com website, youtube and social media channels.

Live Broadcasts will start with qualifying followed by the two races on Saturday 28th August and the same format for the action on Sunday 29th August.

The Apollo Tyres Tor Truck Racing Team are hoping to build on the success attained in Hungary where the team achieved two class victories from the three races held, 2018 Grammar Cup Winner Shane Brereton leads the Goodyear Cup standings after this event with Teo Calvet (Buggyra Racing) in pursuit.

In the overall championship, Brereton lies seventh as the Apollo Tyres Tor Truck Racing team celebrated the good result in their inaugural entry into the full season championship.

Sasha Lenz leads the Championship coming to this round, with five-time Most ETRC Winner Adam Lacko looking to add to those successes on his home circuit holding second place in the Championship, Norbert Kiss (denied a clean sweep of victories at his home round due to mechanical failure) is third with 2019 Champion Jochen Hahn lying fourth.

Timings for the Live Streaming are below:

Here is the link to the race: