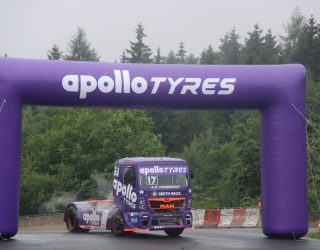 Race fans will finally get the opportunity to attend a live meeting although at reduced capacity due to the pandemic restrictions in place but there will be plenty of action for them to follow and for those unable to attend, following the success of the coverage at Hungaroring in the opening round of the season, fans will be able to follow all of this season’s racing action live via the official fiaetrc.com website, Youtube and social media channels.

Live Broadcasts will start with qualifying followed by the three races on Saturday 17th July and the same format for the action on Sunday 18th July.

The Apollo Tyres Tor Truck Racing Team are hoping to build on the success attained in Hungary where the team achieved two class victories from the three races held, 2018 Grammar Cup Winner Shane Brereton leads the Goodyear Cup standings after this event with Teo Calvet (Buggyra Racing) in pursuit.

Sasha Lenz leads the Championship coming to his home round, with five-time Nurburgring ETRC Winner Adam Lacko following, Norbert Kiss (denied a clean sweep of victories at his home round due to mechanical failure) is third with 2019 Champion Jochen Hahn lying fourth.

The Nurburgring Round of the Championship is often regarded as the Jewel In The Crown for Truck Racing enthusiasts, often pulling in huge crowds who are extremely knowledgeable, Apollo Tyres Tor Truck Racing Team pilot Shane Brereton commented,

“I love driving the Nurburgring Circuit, it is one of the hardest tracks to negotiate from a technical perspective but the boost you get from the crowd is exhilarating. I understand this year is going to be different but we do appreciate the efforts of the race fans to come and support the FIA European Truck Racing Championship and I hope we can put on a fantastic show for those in attendance”.

“The Apollo Tyres Tor Truck Racing team have worked hard to implement some minor changes to the MAN race truck in our efforts to compete closer to the front of the grid, so we will see if these changes will work over the course of the weekend”.

Timings for the Live Streaming are below:

Here is the link to the race: