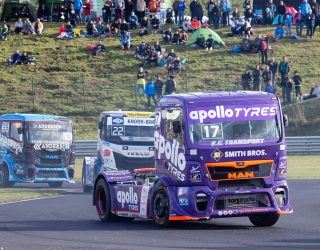 The 2021 FIA European Truck Racing Championship heads to Circuit Zolder for round 3 of this season’s Championship this coming weekend 11th -12th September 2021.

The Apollo Tyres Tor Truck Racing came away from the last round in Most with a positive outlook having secured points in each of the four races to leave Shane Brereton in 8th place in the main Championship and second in the ‘Goodyear Cup’ standings trailing Teo Calvet by 6 points going into Zolder.

The Apollo Tyres Tor Truck Racing team driver was quick to admit that the Class battle is wide open after Teo Calvet’s most successful weekend racing ever at his home circuit, where he secured 3 class wins and a runner’s -up berth.

‘Teo drove well at Most, but we were expecting that with it being his home circuit. He is developing well with more track time and deserves to be leading the class after such a fine performance in the last round’.

‘We are still developing our race truck and we know we have more to come, our results at Most were really encouraging and to obtain an overall podium in the main Championship Race was the highlight of a very successful weekend for the team, now our focus turns to Belgium and our aim to be competitive throughout the weekend’, Brereton added.

‘The Goodyear Cup is not a straight fight between Teo and the Apollo Tyres Tor Truck Racing team, although we have taken three class wins each from the seven races, Steffen (Faas), Jamie (Anderson) and Lukas (Hahn) are quite capable of winning races in this class and it is an exciting series’.

‘Looking ahead to Zolder we know how important qualifying is for the main Championship Races and we will be looking to continue our improvements in this area and perform as best we can to achieve our aims’, the Apollo Tyres Tor Truck Racing team driver concluded.

In the FIA ETRC Drivers Championship, Norbert Kiss heads to Zolder with a narrow three-point lead over Sasha Lenz. Adam Lacko and Antonio Albacete lead the chasing pack hoping to benefit from any misfortune to the leading two challengers, it is close after this just six points separate Jochen Hahn in fifth to Shane Brereton in eighth (Steffi Halm and Teo Calvet sandwiched between them), so Zolder is expecting some close, entertaining and exciting racing this weekend

Live Broadcasts will start with qualifying followed by the two races on Saturday 11th September and the same format for the action on Sunday 12th September.

Timings for the Live Streaming are below: FIA ETRC Live Link or Fleet Speak website link on YouTube