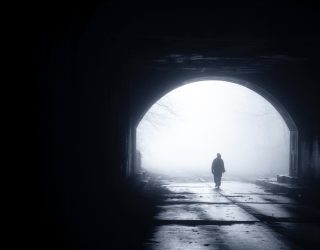 The average truck driver covers a lot of miles over the course of their career. And driving along lonely roads means they can find themselves in some odd situations. However, you can’t help but wonder whether some of the creepier of the situations you hear about are actually less fact, more fiction.

It stands to reason that when you’re driving for long periods of time late at night your mind might start playing tricks on you. So is that the reason why urban legends have always been such a big thing in trucking? Maybe it’s just because truckers love to tell (and hear) a good tale.

Whether you think they’re super spooky or simply the products of overactive imaginations, here are four trucking urban legends you may wish you’d never heard…

One of the creepier trucking tales is the legend of the black dog. You know the one, if a trucker sees a ghostly black dog running towards his or her vehicle they should be worried. The apparition makes the driver swerve off the road or into traffic resulting in either the death of the driver or someone else. The myth was made popular with the Patrick Swayze film, Black Dog.

Another classic trucking urban legend – the female driver who is followed late at night by a truck driver. The trucker keeps flashing his full beam on and off, not letting her out of his sight and following her at every turn and through every red light. This, of course, makes the woman even more terrified. Eventually she pulls into a petrol station and runs inside. The driver follows her in and explains there was a knife-wielding murderer on her backseat. Every time he lifted his knife, the driver would flash causing him to crouch back down again.

One of the oldest trucking legends out there, the tale of the vanishing hitchhiker is here to stay. So the story goes, a figure on the side of the road thumbs a lift from a truck driver. He then rides in the truck, often in total silence, before completely vanishing into thin air. Where did he go…?

Have you heard about the legendary network of underground tunnels that is used only by truck drivers? This subterranean secret society is made up of truckers, shippers and perhaps the odd dispatcher. It’s a wonderful idea – if only it were true. Although, while congestion might not be an issue, the lack of natural light might get a bit much.

So, there you have it, four of trucking’s best urban legends. Are there any others you’d add to the list?