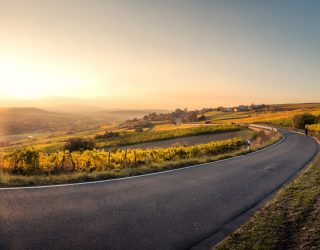 The easiest way to get from A to B is in a straight line. But no one wants to drive in a straight
line all the time? We’d all be falling asleep at the wheel.

Besides, straight lines are not always possible. As a result, it’s up to the world’s engineers to calculate the most efficient way to get between two points, navigating the rivers, mountains and cities that stand in the way. They also need to consider the impact on the environment and the financial cost involved in constructing new road networks.

Needless to say, it’s no mean feat, and some of these roads may leave you speechless.
Here are five you may not have heard of.

One of the most notable roads in China, the Guoliang Tunnel cuts through the rock of the
Taihang Mountains. It’s less than a mile in length, but thanks to gaps in the mountainside
(known as windows by locals), vehicles seem to disappear and reappear along the
mountainside. Built in the 1970s by 13 locals using drills, hammers and chisels, the road
took five years to complete. Today it not only provides residents of the Guoliang village
valuable access to the outside world, it has also become something of a tourist attraction.

This Guoliang Tunnel in China is known as one of the most dangerous roads in the world. Would you brave this treacherous journey? #BGMC_Woodbridge pic.twitter.com/ovJfIcwdns

Officially the world’s steepest residential street (according to the Guinness Book of World
Records), Baldwin Street in New Zealand’s South Island city of Dunedin has a 19-degree
slope at its steepest point (and a gradient of 1:2.86m). As well as being a popular tourist
attraction, there’s also the annual Chocolate Festival (when circular chocolate sweets are
rolled down the hill for charity).

Winston Churchill Avenue crosses Gibraltar’s only runway. When planes take off or come in
to land at its International Airport, traffic is forced to stop. Not ideal if you’re in a hurry.
Unfortunately, the road is the only route between Gibraltar and Spain. Fortunately, the
airport isn’t too busy so delays are kept to a minimum.

The Hanshin Expressway runs through the densely-populated Japanese city of Osaka. The
city is so crowded that at one point to exit the road, drivers are taken straight through a
building. Three floors of the 16-storey Gate Tower Building are taken up by the exit ramp – a
decision that took years of compromise to reach. A barrier reduces the level of noise and
vibrations heard and felt within the building.

Gate Tower Building, Osaka, Japan. The 5th, 6th and 7th floors are occupied by the Hanshin Expressway, which passes right through the building – the result of an unusual compromise between the land owner and the Japanese government https://t.co/vxIq2UwIRl pic.twitter.com/CKXrAfORvF

Trollstigen, or Trolls’ Path is a mountain road so windy it looks like silly string has been
sprayed across the valley when viewed from above. The combination of hairpin bends and mountain views make it a popular route. The road is closed in winter, generally only usable between May and October, and despite its name appears to be troll free.