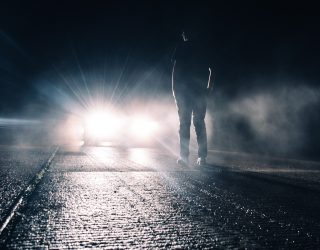 All truck drivers have a few tales to tell. It’s just some of those tales are scarier than others.

Want to get on the road to Spooksville? No, me neither, but it’s Halloween, so what the hell…

From ghosts and ghouls to the mind playing tricks on you, here are some classic spooky trucking tales that may (or may not) give you the heebie-jeebies.

Taking a shortcut home, a trucker saw a man hanging from a tree by the side of the road at 3.40am. When he went back to check, the man was gone.

One truck driver reported seeing what looked like a double decker UFO with rows of lights and rectangle windows. It made no sound, and didn’t flash, just followed the truck for a while and then vanished.

A female trucker pulled into a truck stop in the US because she wanted to use the toilet. Something told her not to get out of her cab so she carried on driving. It wasn’t until later that she heard on the news that a woman had gone missing from that same truck stop a few days before and was yet to be found.

Another tale tells of a driver who saw a large cardboard box rolling down the hill towards his truck. It stopped directly in his path and he was going to drive over it. Something made him swerve to avoid it and when he looked in his rear-view mirror he saw two children emerge from the box and run up the road.

One trucker who made a stop in an unlit, deserted area woke up to see the passenger door opening slightly and the cab lights come on. No one got in and nothing else happened – apart from the driver not getting much sleep. In the morning he realised he’d stopped next to a cemetery.

And then there was the trucker who was woken from his sleep by the sound of a barking dog. It wouldn’t stop and kept getting louder until it was right outside the truck. But when the driver looked out the window instead of a dog, he saw a man with crazy eyes barking at him.