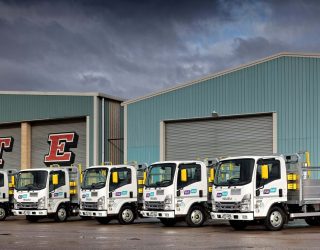 Flogas Britain has continued investing in its Cylinder fleet of vehicles with the addition of 28 new Isuzu N55.150(N) 5.5-tonne narrow-bodied trucks.

The move is part of the firm’s objective to deliver operating efficiencies and realise carbon footprint improvements in-line with its corporate emission targets.

The trucks have been fitted with specialist narrow aluminium cylinder bodies that have been manufactured by Massey Truck Engineering.

The new Isuzu vehicles are just about to roll out into the Flogas Britain fleet ahead of its winter peak season, in further support of the company’s investment in its customer service proposition.

“However, these vehicles presented challenges with payload, which impacted on their overall effectiveness and efficiency.”

Jackie added: “After trialling the 5.5-tonne narrow-bodied Isuzu N55 model in 2020, their performance was met with positive reviews from our driving teams and in addition, we were able to realise a significant increase in vehicle efficiency due to the increased payload.”

Flogas Britain could reduce the amount of empty running

The result of the previous trials with the initial 5.5-tonne Isuzu clearly showed that Flogas Britain could reduce the amount of empty running through reducing the amount of reloading, thus eliminating wasted mileage and enabling them to schedule the vehicles far more efficiently.

The fleet sales manager at Isuzu Truck UK, Lee Barwick, said: “By working closely with Flogas Britain during the trial period, the partnership has realised a new specification of truck for the Flogas fleet that gives them both the additional operational and environmental benefits they were seeking.

“Once again, the flexibility of the Isuzu truck range has enabled us to provide a solution that works really well for Flogas Britain.”

Meanwhile, 12 years after taking their first ever Isuzu truck, A1 Loo Hire is adding a further five new Isuzus to its 100-strong vehicle fleet, with the addition of four Isuzu 7.5-tonne rigids and one Isuzu 13.5-tonne rigid.

These vehicles are all working within the company’s support operation for their portable toilets and other associated products that are in use at outdoor events and on construction sites across the UK.

The company’s long association with Isuzu Truck UK goes back to 2009 when they acquired their first second-hand Isuzu, and this relationship has grown significantly since then.

Clive Owen from A1 Loo Hire said: “All those years ago, our first Isuzu was soon followed by three more in 2011. Since then, we have found them to be so good and really reliable in use.

“As a result, we have not looked back since those early days and Isuzu is now our standard option of vehicles at 7.5-tonnes.”