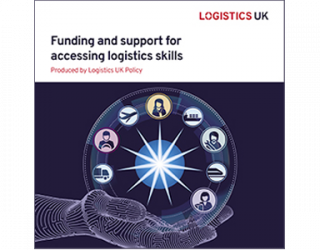 One leading business group has unveiled its free guide to help employers recruit HGV drivers and other logistical workers.

Logistics UK says its comprehensive guide for employers will help tackle the UK’s shortage of skilled drivers, which is estimated to be around 80,000 drivers currently.

The ‘Funding and Support for Accessing Logistics Skills’ guide will also help employers recruit other workers for the logistics sector.

She added: “There is currently an acute issue with the recruitment and retention of roles across our industry, not least HGV drivers but many employers are confused about how to access vital funding in order to recruit and train new workers.

“This new guide, produced with the active involvement of the Department for Education and the Department for Work and Pensions, gives clear and concise information about the schemes available to employers and where and how to apply for funding, including for apprenticeships and traineeships, to attract and train new employees.”

She added: “Much of Logistics UK’s work to support skills in our sector involves campaigning for policy changes to help create a more sustainable pipeline of staff to meet the demand for people in our sector.

“This new guide provides simple and practical steps which will help recruiters right across our industry to identify and enrol the workforce our sector so desperately needs.”

To obtain a free copy of the new Logistics UK guide to ‘Funding and Support for Accessing Logistics Skills’, then visit their website.

Army to help deal with the current HGV driver shortage

Meanwhile, the government’s aim of bringing in the army to help deal with the current HGV driver shortage over the short-term has been criticised by one organisation.

The Road Haulage Association (RHA) says that deploying Army personnel will not ‘scratch the surface’ in helping with the UK’s growing delivery crisis.

The RHA’s Richard Burnett was responding to reports that HGV drivers from the military, including drivers with the Royal Logistics Corps, will be getting behind the wheel to make deliveries.

However, the Ministry of Defence has indicated that no official request has been by the government.

Mr Burnett said that of the numbers being proposed, 40% of those are in the Territorial Army and are reservists, which means that the military may struggle to deal with the scale of the HGV driver shortage.

The RHA is also laying the blame of the current crisis on the Covid pandemic with many European drivers returning home to their EU countries when the pandemic began – and then not returning because of Brexit.

The organisation says that the disruption to driving tests is also holding back HGV driver replacements.

Now, the RHA says that Brexit immigration rules need to be relaxed to enable EU drivers to return and work in the UK on a temporary basis.

In his interview, Mr Burnett said: “We need the government to wake up and realise that the only short-term solution is to address this with the Home Office shortage occupation list and have temporary visas to allow us access to short-term additional labour while we train a UK-based workforce. This is going to take at least 18 months to tackle.”