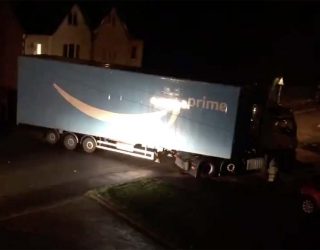 A HGV got stuck across a narrow road giving a sleepless night to people living in Lichfield.

The Amazon lorry had attempted to travel down Shortbutts Lane at around 2am, but the driver had gone the full length of the street only to find a railway bridge in the way and discover the vehicle wouldn’t fit under it. His attempts to turn the truck around failed, leaving the vehicle stuck.

It’s not the first time a truck gets stuck under a bridge, like the time Google Maps captured an embarrassing moment for a truck driver who underestimated the height of a bridge.

“We woke up shortly before 2am by a commotion and the noise coming from the lorry.

“Police and neighbours were involved in trying to get the lorry moved but it remained stuck between two houses.”

The vehicle was eventually rescued by a tow truck at around 5am.