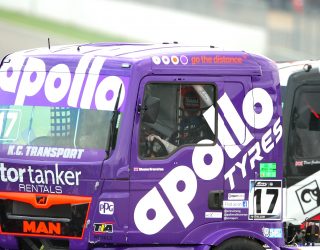 Have you seen Thelma yet? If not, there’s still time as she’ll be making her final track appearance of the year at the world famous Le Mans circuit on 28/29 September. With her distinctive purple, white and orange colours, Apollo Tyres’ TOR Truck Racing MAN truck (aka Thelma) hopes to go out on a high when the team competes in the penultimate rounds of the European Truck Racing Championship.
Revving up alongside the big names in truck racing, Thelma will be racing on the Sarthe Circuit in front of around 80,000 people. As well as a full program of racing, there will also be plenty of off-track entertainment, a truck parade led by Renault, a show by Fondation Vinci, and the obligatory fireworks display – plenty to keep the crowds happy.

Following the success of Convoy in the Park in Donington Park last month, the Apollo Tyres TOR Truck Racing team have made a few tweaks to Thelma to ensure she’s in tip-top condition for her final weekend of racing. Team driver Shane Brereton is confident there’s more to come from the Apollo Tyres truck. He stated: “As ever, we will be looking to be competitive whilst we learn more about Thelma’s capabilities. We worked hard at Donington to achieve three podium finishes and we will gain more experience racing on the Bugatti Circuit against Europe’s elite truck racers.”

He added: “The team have had limited track time this season but the results we have achieved to date have been reward for the countless hours invested into producing a competitive race truck. The support of Apollo Tyres has enabled us to take advantage of on-track testing and the interest generated has been greater than I could ever have imagined with our distinctive ‘Apollo Truck’ design.”

Speaking about the event, Steve Miller, UK TBR sales manager noted that the rise in brand awareness has surpassed the company’s expectations and said it had promoted “the whole TBR product range to an audience who were unaware of our existence a few months ago.” He continued: “Thelma has certainly enjoyed her limited time in the spotlight this season and Le Mans is a wonderful circuit to promote our Endurace products to such a knowledgeable audience. “We are hopeful she will go the distance in the four races scheduled for the weekend.”

Let’s hope she does just that! After all, she is the Thelma to our Louise…