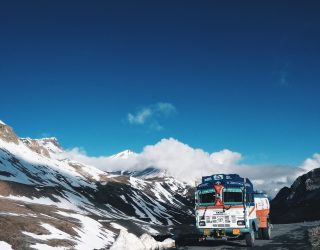 We’ve seen the terms “arctic truck” or “artic lorry” being used quite a lot on the internet so we thought we’d put on our pedantic hat and do a short post on where this word comes from and the confusion with a very cold region on our planet.

The original full word for the type of truck people are describing is “articulated lorry” or “articulated truck” and it refers to a truck with both a tractor and a trailer with a permanent, or at least semi-permanent, pivoting joint. This allows the lorry to make quite sharp turns for a vehicle that size. For our American friends, an articulated lorry is what you would call a semi.

The word “articulated” has nothing to do with it being pronounced well. The word is derived from the Latin word “articulus” which means “a small joint”. So the word is directly related to that pivoting joint.

Many British people abbreviate the word to “artic lorry” or just “an artic”. Here’s where the confusion in the writing comes from. Because it is an abbreviation from the word “articulated”, the word “artic” doesn’t have a “c” in it.

If you are writing about an “arctic lorry” instead, you’re actually referring to the regions around the North Pole. You might be a fan of the TV show Ice Road Truckers but that’s a whole different type of truck!