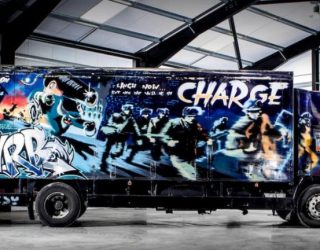 Most of the time, people can’t get enough of Banksy’s work, but a 17-tonne lorry spray painted by the artist has failed to sell at auction.

The vehicle, dubbed the ‘Turbozone Truck (laugh now but one day we’ll be in charge)’ is believed to be the largest work created by Banksy.

The artwork, which was created before the artist become famous, had a guide price of between £1 million and £1.5 million and had been authenticated by the artist. A spokeswoman for the auction house said they were considering a number of offers made since the auction took place.

Banksy started work on the truck in 2000 at an open-air party in Spain.

The spokeswoman explained: “He was presented with the Volvo FL6 by Mojo, the co-founder of Turbozone International Circus, a touring company known for its extravagant pyrotechnics.

“Banksy – then an obscure graffiti artist – started on this blank canvas during the party and continued to work on it for the following two weeks.”

I guess if you’re an art collector, a 17-tonne truck isn’t as easy to hang on a wall as a canvas…