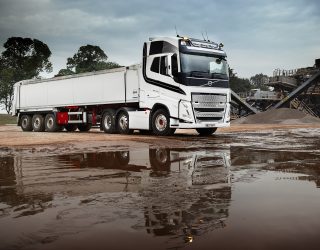 Hereford-based haulier Bayliss Bros has been ‘blown away’ with the fuel consumption figures for its new Volvo FH 540 Globetrotter 6×2 tractor unit.

It is also equipped with Volvo’s smooth-shifting I-Shift dual-clutch transmission and has updated styling, enhanced fuel-saving features and a driver-focused interior.

The truck has only recently arrived at the business, but the initial miles per gallon return is far better than any other truck the company has run in the past.

Phil Bayliss, who owns the business with his brother Perry, said: “It is currently 2 mpg up on anything we’ve seen before.

‘We would still be doing cartwheels’

“Admittedly, we’ve not had it long and we’re expecting that to tail off a bit, but even if it went down by a mile per gallon, we would still be doing cartwheels.”

He added: “It’s unbelievable, we’re getting 8.9 mpg which is unheard of for us as we run our trucks at 44 tonnes 75% of the time – running on empty isn’t making me any money.

“The dual-clutch has also really impressed us. It makes life easier for the driver, you don’t even know it’s changed gear. It’s a great bit of kit.”

Inspired by motor racing gearboxes, the I-Shift dual-clutch changes gear in a fraction of a second and it also transforms the driving experience and boosts productivity.

The system can pre-select the next gear while driving in the current one for seamless gear changes without interrupting power delivery.

The new FH is powered by Volvo‘s D13K engine producing up to 540 hp and 2,600Nm of torque and was supplied by Truck and Bus Wales and West.

Bayliss Bros expects it to clock up around 75,000 miles per year, delivering aggregates to concrete and asphalt plants around the UK.

9-inch side display for infotainment and satnav

There’s also a nine-inch side display that provides infotainment, navigation assistance, transport information and camera monitoring, letting drivers have complete control of the information they want to see.

Replacing a truck from a rival manufacturer, the new FH takes Volvo’s total stake in the Bayliss Bros fleet up to 50% and it is set to be followed by two more new FHs over the next 12 months.

Phil said: “Generally, we try and change four trucks a year and recently most of the new orders have been Volvo.

“We know it’s a reliable product, and in this line of work, that’s what you want to be known for. To do the job properly, you need vehicles you can rely on.

“We’ve been having one or two issues with the other manufacturer we use and that’s why we went for Volvo again this time.”

‘Driver retention is such a big issue’

He added: “We like to use top of the range products, spec’d to a high level to help make sure we keep our drivers happy as well as our customers – driver retention is such a big issue in the industry at the moment. Needless to say, the driver of this new FH absolutely loves it.

“The handover and driver training we get from Truck and Bus Wales and West is always spot on. Overall, we couldn’t be happier.”