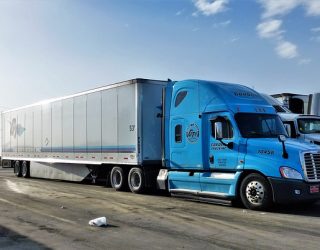 New EU rules on road transport aim to create better working conditions for truck drivers and ensure fair competition within the trucking industry. That all sounds great in theory, but what about the reality?

Trucking industry regulation already existed in these areas – but so too did the numerous loopholes that enabled different countries to interpret the rules about commercial vehicles in different ways.

You’d think once the package was passed, the inconsistencies would end. However, the controversy is far from over.

Truck drivers are losing out

Here’s a look at why the reality of this package is already falling short of the aim.

Working conditions for truck drivers can be dismal. Drivers are often forced to spend weekends in parking lots, end up driving for hours at a time to meet a deadline, and are away from their families for weeks on end.

The new rules state that truck drivers cannot spend their weekend breaks in their vehicle and their employer should book them a room in which they can stay. Employers should also organise rotas so that truck drivers get to spend more time at home, because everyone knows how lonely it is on the road.

The reality is that there are not enough parking spaces and hotel rooms to meet the demand and many truck drivers are struggling with mental health issues as a result of time away from friends and family.

Although the rules are designed to create a more even playing field, they could cause the opposite. For many, the market protection measures are little more than social measures between Western Europe and the countries that have joined the EU since 2004. A number of Central and Eastern European countries have called for amendments to the reforms, without much luck.

The reality is that Eastern European haulage companies could end up losing well-paid jobs in the West – potentially ending in bankruptcy.

Roberto Parillo, a specialist from the European Transport Federation commented: “We must ensure that all companies have the same opportunities to compete in all markets.”

Talking of which… Let’s not forget the clashes between the UK and the EU over rules for UK trucks driving in the EU.

The UK’s decision to allow UK drivers to follow different rules has angered the EU. But the RHA sees Brussel’s reaction as short sighted. The focus should be on keeping commercial vehicles and the supply chain moving rather than restricting the access UK truck drivers have across Europe.

Commenting on this, RHA chief executive Richard Burnett said: “Maintaining the supply chain between Great Britain and the rest of Europe can only be achieved on a level playing field. The UK is taking a liberal view – suggesting that cabotage remains on the table. But symmetry works both ways.”

He continued: “If the EU remains adamant to remove cabotage, the UK will have no choice but to follow suit. If this is the outcome then the intransigence of the EU means that they will be shooting themselves in the foot.”

Better working conditions for truck drivers is essential, after all, there’s a reason why so many truck drivers leave their jobs.