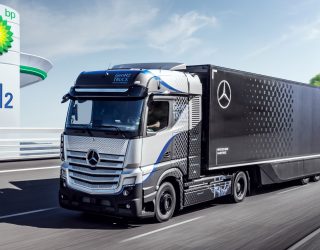 BP and Daimler Truck have unveiled plans to accelerate the introduction of a hydrogen network in the UK to help decarbonise freight transport.

The companies will team up to pilot both the development of hydrogen infrastructure and the introduction of hydrogen-powered fuel-cell trucks in the UK.

Under the tie-up, BP will design, construct, operate and supply a network of up to 25 hydrogen truck refuelling stations across the UK by 2030.

BP will be supplying these stations with ‘green’ hydrogen which is generated from water using renewable power.

Daimler Truck says it expects to deliver hydrogen-powered fuel-cell trucks to its UK customers from 2025.

Karin Rådström, the CEO of Mercedes-Benz Trucks, said: “We are consistently pursuing our vision of CO2-neutral transport.

“Especially for CO2-neutral, long-haul road transportation, the hydrogen-powered fuel-cell drive will become indispensable in the future.”

He added: “Together with BP, we want to jointly develop and scale the required hydrogen infrastructure by putting our hydrogen-powered fuel-cell trucks into our customers’ hands and support the decarbonization of the UK freight network.”

He said that political support will play an important role in promoting the creation of an infrastructure for green hydrogen to help make hydrogen-powered trucks economically viable.

‘Hydrogen is critical to decarbonising’

Emma Delaney, BP’s executive vice president for customers and products, said: “Hydrogen is critical to decarbonising hard-to-abate sectors – and for heavy and long-distance freight it is sometimes the only answer.

“Working with a leading manufacturer like Daimler Truck, we can accelerate the deployment of both vehicles and infrastructure and pioneer the use of hydrogen to fuel the next generation of UK freight.

“From producing and supplying hydrogen, through to building and operating the fuelling stations, BP is perfectly positioned to transform transport and ultimately build a better energy future.”

Daimler Truck says it has the ambition to offer only new vehicles that are CO2-neutral in driving operation by 2039 and is focused on both CO2-neutral technologies, battery power and hydrogen-based fuel cells.

The truck maker is currently a new prototype of its Mercedes GenH2 Truck on public roads in Germany. The first GenH2 trucks are expected to be handed over to customers starting in 2027.

BP said it is working with partners to help deliver the future of mobility and services for customers.

The firm already has 11,000 electric vehicle charging points globally and is expanding its network to 70,000 by 2030.