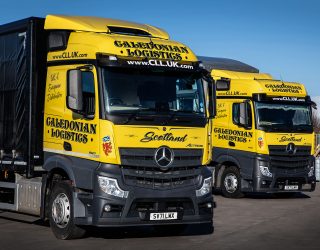 Caledonian Logistics opted for the best of both worlds with its latest fleet order, choosing a fleet of 35 Mercedes Actros trucks in rigid and tractor unit form.

The Aberdeenshire-based company’s new vehicles are being supplied by local dealer BLS Truck & Van and are the subject of contract hire agreements with Mercedes-Benz Finance.

Most of the Actros trucks are replacing vehicles made by two other manufacturers that have reached the end of their contract hire terms.

However, Caledonian Logistics is also increasing its total fleet strength by a couple of vehicles, to 80.

‘Had Mercedes trucks on the fleet before’

The haulage firm’s managing director, Derek Mitchell, said: “We’ve had Mercedes trucks on the fleet before – indeed we’re running some Atego 7.5-tonners at the moment.

“But it’s been four or five years since we last acquired an Actros.”

He added: “We’ve returned to Mercedes-Benz with this order in part because we were offered shorter lead times than rival brands could quote, but also because dealer BLS Truck & Van has made great strides since taking over the franchise for the north of Scotland and offers a high level of customer service.”

The 16 tractor units are now in service, and all are 2551 models with flat-floored BigSpace cabs.

Nightly trucking runs to the Palletways hub in Lichfield

Based at the operator’s headquarters in Kintore, and at depots in Inverness and Cumbernauld, these vehicles are making nightly trucking runs to the Palletways hub in Lichfield, Staffordshire – Caledonian Logistics has been a member of the national delivery network for more than 20 years.

This high-mileage application will see each truck average around 320,000 km per year.

The rigids, meanwhile, have been earmarked for local collections and deliveries.

The first two to be delivered are both 18-tonne 1827 models with curtainside bodies by Truckcraft, and have 7.7-litre engines, rated at 272 hp, and 2.3-metre StreamSpace sleeper cabs.

They will be joined over the coming weeks by another 12 identical vehicles, and four 26-tonne Actros 2536 variants with 10.7-litre, six-cylinder engines that produce 360 hp.

‘Work needs to be completed to a tight schedule’

Mr Mitchell said: “Our trucks are on timed runs. This means any work needs to be completed to a tight schedule, so they’re back on the road exactly when we expect.

“We have every confidence that the BLS team will keep the fleet on the road, where it belongs.”

He added: “The Actros has always been a fine vehicle and that remains the case – I’ve ridden in one of the new units as a passenger on a run down to Cumbernauld and found it very comfortable.

“The 510 hp engines we specified mean they are never short of power, and while we have yet to measure their economy figures accurately, the early signs on both diesel and AdBlue consumption