The 2021 FIA European Truck Racing Championship heads to France for round 4 of this season’s Championship this coming weekend 25th-26th September 2021. 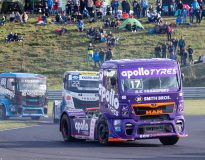 The 2021 FIA European Truck Racing Championship heads to Circuit Zolder for round 3 of this season’s Championship this coming weekend 11th -12th September 2021.

The 2020 ETRC DIGITAL RACING CHALLENGE concludes its inaugural Championship with a visit to the Jarama Circuit and the Apollo Tyres Tor Truck Racing team hoping for better fortunes.

The 2020 ETRC DIGITAL RACING CHALLENGE hosts the penultimate rounds of the Championship at the famous Le Mans Bugatti Circuit with the Apollo Tyres Tor Truck Racing team hoping for better fortunes this time out.

ZOLDER HOSTS ROUND 6 FOR THE APOLLO TYRES DIGITAL TRUCK

The 2020 ETRC DIGITAL RACING CHALLENGE moves to Belgium and the Zolder Circuit for the Sixth Round of the digital racing championship, increasing it’s fan base as the series progresses.

Are you a truck racing fan? Then re-watch the Most circuit here. The trucks are in the original 2020 liveries, the circuits are exact replicas of the real venues and a live race control based directly at the Nurburgring circuit to oversee all the ‘on track’ action.

NEXT STOP MOST FOR THE APOLLO TYRES DIGITAL TRUCK

Are you a truck racing fan? Then re-watch the 2020 ETRC digital racing challenge here.

NEXT UP NURBURGRING FOR THE APOLLO TYRES DIGITAL TRUCK

Brereton, still getting used to simulator racing, had explosive starts in both races but suffered a number of racing incidents to record tenth place finishes in both races.

The Apollo Tyres Tor Truck Racing MAN piloted by Shane Brereton made its Championship debut in Misano two weeks ago, the first time Shane had driven a ‘virtual race truck’. Shane Brereton gave an exclusive interview to Fleet Speak ahead of this weekend’s event. ‘Misano was a great experience, the track is identical to the real circuit. I had never driven a virtual race truck and it took some time to set the truck up. We had limited testing time and during practice we lost an engine. The races were good fun, although the Apollo Tyres liveried truck was running at the back of the pack, we gained some understanding of what the game entails’, was Shane’s assessment of the debut. ‘The Slovakiaring is quite a demanding circuit, we have been testing and working on different settings since Misano ...[Read More]

Are you a truck racing fan? Then re-watch the second 2020 ETRC digital racing challenge here