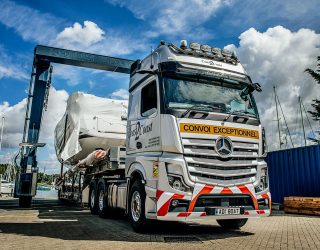 It’s been plain sailing for Coast2Coast Marine Transport since commissioned its first Mercedes trucks – a pair of eye-catching double-drive tractor units plated for operation at gross combination weights of 80 tonnes.

These vessels can weigh anything up to 35 tonnes and given that most exceed the standard permissible width, the work is invariably governed by ‘convoi exceptionnel’ regulations

Coast2Coast Marine Transport was launched in 2004 by Russell Mitchell, who had just left the Army after 25 years’ service with the Royal Engineers.

As a Warrant Officer, Russell ran a fleet of 300 trucks; he was also a diving instructor and directly involved in the raising of the Mary Rose.

The new venture was quick to establish a positive reputation within the boat-owning fraternity and grew rapidly, its location in Portchester providing easy access to the ferry terminal and south coast marinas.

The firm is now the UK’s biggest boat movement specialist, with a fleet of six tractor units, eight trailers and a number of escort vehicles.

Russell remains at the helm and has been loyal to the same manufacturer from the outset but finally resolved to look elsewhere for his company’s new trucks after becoming disillusioned with the service he was receiving from its local representative.

He said: “It didn’t take us long to settle on Mercedes. The Actros looks great and thanks to its advanced technology leads the field in terms of safety, reliability and cost-efficiency.

“With the help of Marshall’s sales executive John Sunderland, we were able to specify the trucks perfectly.”

Russell continued: “We’re an international operation and run regularly to France, Portugal and Spain, so our drivers are often away from home for more than three weeks at a time.

“The roomy and comfortable GigaSpace cab is, therefore, a massive ‘plus’ – we’ve kitted ours out with TVs, microwaves and fridges, and the lads love them.”

The trucks are being inspected and maintained under five-year Mercedes-Benz Complete Service Contracts at Marshall Truck & Van’s Fareham workshop.