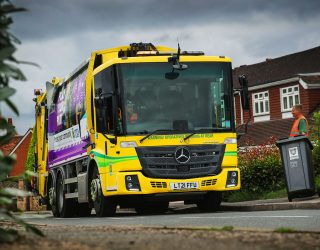 Dacorum Borough Council has made a second major investment in the Mercedes truck technology that is already delivering enhanced reliability and uptime, greater safety and improved operating efficiency for its refuse fleet.

The West Hertfordshire council has just added another 14 Econic refuse collection vehicles to the 11 it commissioned in January 2020.

The 32-strong fleet of refuse collection vehicles is now dominated by Mercedes with the latest Econics 2630LL models in 6×2 rear-steer configuration.

They are powered by 7.7-litre in-line six-cylinder engines that transmit their 299 hp output via six-speed Allison automatic gearboxes ideally suited to stop-start applications.

The bodies offer a smart solution for modern waste management by providing two sealed compartments that can be operated independently, preventing any cross-contamination.

This means that two waste ‘streams’ – residual domestic refuse and recyclable food, for example – can be collected and discharged separately.

The Econics are also equipped with ISS four-camera video systems which have live-view and recording functions, and Cyclear detectors to warn drivers of the presence of vulnerable road users on the nearside.

Those trucks that have been in service since last year have single-compartment Geesinknorba GPM IV compactors and Combi Split bin lifts.

The outstanding reliability of its first batch of Mercedes Econics was instrumental in persuading Dacorum Borough Council to commit to its second order.

Transport manager Simon Smith said: “The vehicles we took on last year have not missed a beat.

“They start first time each morning and that’s crucial as our teams start work at 6.30 am. In doing so, they have borne out my previous experience with other local authorities that also operate Econics.”

All 25 trucks were supplied by S & B Commercials, which has been trading as Motus Truck & Van since the completion in August of its formal tie-up with another member of the manufacturer’s franchised dealer network.

The improvement in vehicle availability – the council’s previous trucks spent significantly more time in the workshop – was a major ‘plus point’ in the Econic’s favour.

However, it was not the only reason behind Dacorum Borough Council’s decision to switch to Mercedes.

Mr Smith added: “We undertook a thorough evaluation of the various products on the market and trialled demonstrators by several suppliers.

“The package from Mercedes and Geesinknorba gave us everything we wanted, and at a competitive price, with the promise of timely, customer-focused aftersales support should we need it.”

Dacorum Borough Council covers an area that includes towns and historic villages with a combined population of more than 150,000.

Most of the refuse vehicles are based at its headquarters in Hemel Hempstead, with a smaller number working from a depot at Tring.

Purpose-designed for urban duties, the Econic range employs innovative catalyst technology that helps to reduce emissions of particulate matter and oxides of nitrogen.