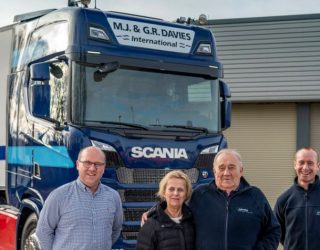 Scheduled for delivery over the coming months, the first of these vehicles has been specially liveried in the firm’s original red chassis and two-tone blue cab colours to celebrate the company’s first 50 years in business.

‘Golden Anniversary truck would be the ideal tribute to our parents’

James said: “We decided the Golden Anniversary truck would be the ideal tribute to our parents and their achievement of creating a business which has proved to be sustainable over the long term.

“Our Scania fleet has played a key part in that success. Three of the ten trucks in our existing fleet have exceeded one million kilometres, and all have proved to be extremely fuel efficient and reliable – not one of them has needed a new clutch or a brake re-line, for example.”

The new trucks have been supplied by Scania’s Fareham branch and the new vehicles will be covered by extended Scania Repair and Maintenance contracts for the coming seven years.

In addition, Davies International Transport utilises Scania’s telematics service to monitor the performance of its fleet.

‘Scania’s Repair and Maintenance package gives us peace of mind’

James explained: “Scania’s Repair and Maintenance package gives us peace of mind and its telematics service has long played a key role in assuring the efficient and economical operation of our fleet.

The Fareham-based haulier employs 15 members of staff and is principally involved in the distribution of pharmaceutical, ship stores and food products to and from Europe.

As an additional part of its 50th anniversary celebration, the company set itself a target of supporting Steven Davies’ fundraising efforts by reaching his target of £50,000 for Great Ormond Street Children’s Hospital, a goal which it successfully achieved in 2021.

Steven has been fundraising for GOSH for several years completing multiple marathons all over Europe and most recently becoming a Community Ambassador for the charity.

To hit the ‘Big 50’ the company held a birthday event in the summer but most significantly issued a book called ‘A Fridge Too Far’ which provides and A-Z of the company’s history over the last 50 years with 100% of the sales from the book going towards the GOSH.