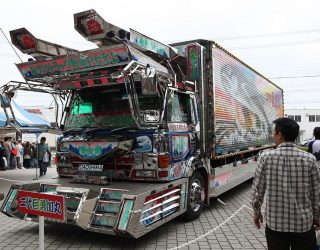 Dekotora trucks have been part of the world of trucking for more than 50 years. But there are plenty of us who’ve never heard of them.

Also known as ‘art trucks’, dekotora first became popular after the release of the Torakku Yarô (Truck Rascals) film series in the late 1970s – basically, Japan’s answer to Smokey and the Bandit. The subject of these films is nothing new: a couple of truckers displaying their driving skills to one other while dodging the law.

However, what made these films so significant were the decked-out trucks they were driving. And Japan’s trucking scene has been hooked ever since.

When then dekotora trend was in its heyday, there were thousands of these trucks on Japan’s roads, often used to deliver goods. Today, they are fewer in number (500-600) and no longer used for work, but there are plenty of dekotora enthusiasts keen to keep the tradition alive.

Every dekotora truck is unique, kitted out with sumptuous fabrics, chandeliers, rooms and lights. And when I say lights, I mean lots and lots of lights.

I don’t think trucking could get any more kitsch. Do you?