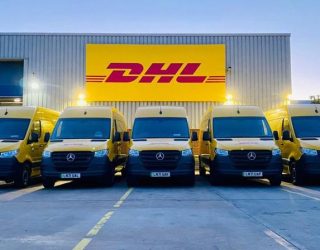 DHL Express, the world’s leading international express delivery service provider, is rolling out 270 new electric vans, which will be taking to roads across the UK as part of its last-mile fleet.

The move follows last year’s introduction of 50 electric vans to operate out of sites across the country and the firm says this next phase demonstrates its ongoing commitment to reaching its sustainability goals and the successful integration of electric vehicles.

The zero emissions Ford E-Transits have a range of 140 miles and a payload of 1,000 kg, similar to the diesel vans they are replacing.

The bodies have been customised for ease of use for drivers and to ensure continued high service levels.

Drivers are provided with industry-leading training to ensure they are familiar with the new vehicles and confident in their capabilities.

Operating at 4.25 tonnes, the vehicles can be driven with a standard Category B licence under the driving licence derogation rules for alternatively fuelled vehicles, enabling the same payload to be carried as in their diesel equivalents despite the additional weight of the electric powertrain.

Developing its infrastructure to support the EV roll-out

DHL has also been focused on developing its infrastructure to support the EV roll-out and in addition to stand-alone charging points across its network, the firm now operates 10 fully integrated EV-ready sites.

Plus, an additional three sites are opening this spring, and 13 more planned later this year.

The integrated charging infrastructure is scalable to allow for additional electric vehicles as the fleet grows in the coming years.

Richard Crook, DHL’s director of fleet, said: “We’re thrilled to be sharing another update on our journey to a fully electric fleet.

“We’re extremely proud of the progress made so far in reducing the environmental impact of our fleet, and this next stage of roll-out is a positive step towards achieving net-zero emissions by 2050.”

The latest boost to DHL’s electric vehicle roll-out follows DHL Parcel’s move to add 50 electric vans across UK cities before the end of 2021.

That followed the introduction of electric vans in London earlier in the year and the firm announced it was investing a further £2.8m to extend its fleet across the UK.

Those vans went into operation in Glasgow, Leeds, Manchester, Leicester, Bristol and Southampton, with additional vehicles being added to the company’s electric fleet in London.

The zero emissions, Mercedes eSprinter L2 has a range of 95 miles and a payload of 775kgs and the bodies have been customised for ease of use for drivers.

The rapid charging and extended range of this next generation of electric van makes them ideal for use in city environments, bringing down the carbon impact of last-mile deliveries.