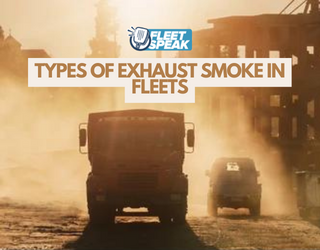 Irrespective of the colour that is black, white, blue or grey exhaust smoke; each exhaust indicates a potential case of hazard in your vehicle.

If your fleet uses a gasoline engine, below are some common reasons the exhaust smoke would release colorful smoke.

Know about the issue before getting into any unwanted situation.

If you see Black smoke out of your vehicle, it signifies a disproportionate amount of fuel. Modifying diesel engines can make a vast amount of black exhaust fumes, but if the engine isn’t tuned for performance, the chances of burning excess fuel are higher up due to faulty injectors or a malfunctioning turbocharger creating a lack of air supply to the system. Black smoke can be also caused due to build-up carbon or a poor fuel quality.

If you see White smoke out of the vehicle, these are the issues you might need to deal with: Fewer white smoke can mean condensation inside the engine, it can also possibly mean due to an unburned fuel, faulty glow plugs, Faulty injectors or injector timings, low compression, cold starts or even a clogging air filter could be a reason. Excessive white colour of smoke typically indicates a water leak by a cracked block, cracked head or a blown head gasket.