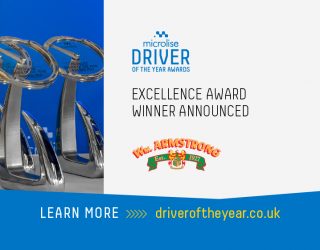 The winners of the Microlise Driver of the Year Awards 2021 have been revealed.

And this year, the winner of the excellence award has been scooped by the family-run haulage business, WM Armstrong.

The firm picked up the award because they had the most drivers in the top 1,000 of the telematics data collated by Microlise from more than 252,000 truck drivers in the UK.

‘This is a fantastic achievement’

Associate director of the haulage firm, Shane Kenny, said: “This is a fantastic achievement that could not have come at a better time.

“The past 18 months have been hugely challenging for the nation and our drivers really stepped up and continued to deliver essential goods when they were needed the most.”

He added: “We have been positive users of the Microlise solution for several years and find it invaluable for highlighting areas where we can improve our operation. We also use the Driver Performance Management tool with its A-G rating to incentivise and reward our drivers.”

The awards were assessed by an independent judging panel including the Road Haulage Association’s chief executive, Richard Burnett; the editor of Motor Transport, Steve Hobson; the Traffic Commissioner for London and SE England Sarah Bell; the executive director of Microlise, Bob Harbey.

The driver of the Year Awards

Nadeem Raza, the chief executive of Microlise, celebrated the calibre of this year’s winning organisation and said: “The Driver of the Year Awards, which is now in its seventh year, continues to highlight the expertise and sheer dedication of drivers who travel the length and breadth of the UK, and further afield. We congratulate WM Armstrong for this well-deserved team recognition.”

Other Driver of the Year Award winners

The other Driver of the Year Award winners for 2021 includes Anthony Bell from DHL Supply Chain who won the Short Distance category, featuring drivers who regularly undertake journeys totalling up to 30,000 miles per year.

The judges said there ‘was very little’ between the drivers who were shortlisted in each category but pointed out that they were impressed with Tony’s level of technical ability.

After moving to the UK from Poland, Ziggy learned to write and speak English and undertook a hazardous cargo exam in what was a foreign language to him. As a driver for Maritime in Manchester, Ziggy has established himself as their top driver for the past two years running.

Stuart Moore who has been driving for Gist for 25 years won the Long Distance category.

He puts his driving skills to the test daily as he collects consignments from fresh food suppliers, farms and factories and manoeuvres around the farm tracks and narrow roads that dot the Suffolk countryside.