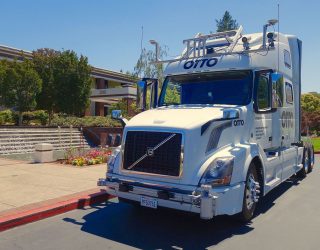 With trials already taking place across Europe and the US, investment in automation technology is big. According to research by ITF, as many as 4.4 million of the 6.4 million trucking jobs in Europe and the US could be lost to autonomous vehicles.

A large group of companies is applauding the arrival of driverless vehicles. With 45% of total road freight costs currently going towards labour, haulage companies are looking for ways to lower operating and fuel costs.

Driverless trucks will also help solve one of the biggest problems for the sector: driver shortages. Long-haul drivers are the most sought after people in logistics. Recruiting drivers is a huge challenge as many people are reluctant to commit to long periods away from home, and the lifestyle that comes with it.

Most predictions about autonomous trucks on our roads come with a caveat though – the vehicles will still require human intervention.

Platooning, for example, allows groups of trucks to drive at close proximity to one another, synchronising braking and reducing air resistance to be more fuel efficient. This is the first step towards autonomous trucks, but more importantly, it relies on a human driver being in control.

For every self-driving start-up working on technology assisted by a human driver, there is another focused on removing the human element from the vehicle entirely. Full autonomy may not be the immediate future, but there is a growing sense amongst truckers that they should be watching their backs.

Although job losses are an inevitable concern and businesses have a responsibility to their staff, employees and their families, working conditions of drivers in semi-autonomous cabs and the risk of lower wages need to be taken into account too.

Silicon Valley fortunately still faces some serious barriers when it comes to self-driving technology for trucks. The weight of the vehicle, the distances travelled, and the technology already featured in trucks all pose considerable challenges.

And let’s not forget the biggest challenge of all: there is no room for error. Robots may eliminate human mistakes, but with safety cited as a key benefit of this technology, the public will hold robots to a much higher standard. Motorways may be less complex than city roads, with fewer intersections and clearer road markings, but lorries are big and fast, and the idea of one hurtling down a road with no driver may not sit well with other road users.

Some argue that it depends on how you define ‘truck drivers’. Whether a driver is sitting in the cab of a leading platoon vehicle or sitting in front of a screen handling 20 trucks during an eight hour shift, the experience may be significantly different, but both are classed as ‘driving’. I guess it might mean less time away from home, but I’m still not convinced about the idea of driving a truck without actually driving a truck.

The situation is not going to change overnight – it could take years. According to José Viegas, former secretary-general of the International Transport Forum (ITF): “Driverless trucks could be a regular presence on many roads within the next ten years.”

I appreciate that technology moves on and that haulage companies need to work efficiently and cost-effectively, but even if an autonomous truck was 99.999% safe, I’d still be really concerned about the remaining 0.001%. Plus, companies need to consider the human side and the impact some technologies might have on the livelihoods of many people…

What are your views on driverless trucks? Are you for or against?