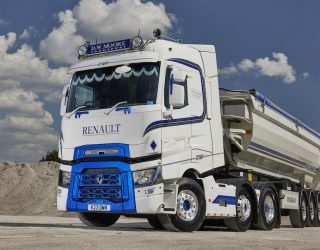 Supplied by Sparks Commercial Services, the T520 High replaces a competitor model and joins the 7-strong fleet on tipping artic and low loader work across Somerset, Dorset and Wiltshire.

The firm’s director, Darren Moore, says the inspiration for the switch to Renault Trucks came from his late father.

He said: “My Dad, Dave Moore, worked in the transport industry for over forty years and was always a huge fan of the Renault Trucks Magnum.

“He worked for Ross Garrett as a transport manager and it was there, in 1993, that he got behind the wheel of one the first Magnums in the UK.

“He liked the way it drove and from there on in he was a huge fan, and the Magnum was always his truck of choice.”

Darren said: “Dad said it often pays to try something different and it was his steadfast enthusiasm, together with the T High’s well-earned reputation, that convinced me to give Renault Trucks a try.”

He added: “Sadly, Dad passed away last December and didn’t get to see the finished vehicle on the road, but I know he would be happy that I listened to his advice and that my fleet finally has a Renault Truck in its line-up.”

The T High’s efficient 13-litre engine is coupled to an Optidriver AT 2612F 12-speed gearbox with automatic clutch and gear shifting strategy optimised for Fuel Eco.

Darren said: “The truck went on the road in June, and we know we made the right choice; it’s a great looking vehicle that turns heads.

“The driver has nights out so the cab space and comfort is important and I’ve had only compliments on this so far. And, whilst my drivers are good and none of them are ‘hard drivers’, we have been impressed with the fuel consumption.”

The T High has been supplied on a four-year Renault Trucks Start & Drive Excellence full repair and maintenance service contract and a two-year subscription to Optifleet Check; technical data reports for fuel consumption monitoring by vehicle and by driver.