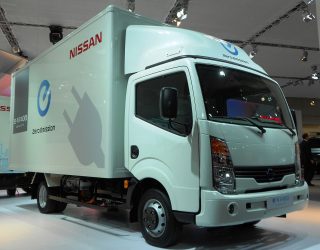 Electric trucks have received a lot of media coverage of late – from the much hyped to the more low-key e-truck launches, every innovation is a step closer to cleaner air.

Eco-truck evolution is rapidly turning into an eco-truck revolution. But, just how green are electric trucks?

It has also promised 645km on just 30 minutes of charge thanks to an all-singing, all-dancing ‘megacharger’.

The response was all positive. But then a group of experts got involved, and things got complicated. A group of Oxford University professors suggested that Tesla’s megacharger would need a disproportionate amount of electricity in order to deliver these results.

As John Feddersen chief executive of the consultancy Aurora Energy Research explained, the power needed to fill the megacharger is equivalent to the power used by 3,000 to 4,000 average houses.[1]

This new wave of green technology is being driven by tighter EU legislation and low emission zones (LEZs) in cities. Truck manufacturers are looking for more environmentally-friendly solutions. From gas and electric to kinetic energy recovery systems, the industry is keeping an open mind about alternatives to diesel fuel.

In Europe, the commercial vehicle sector has made significant progress in reducing emissions. Euro 6, introduced in 2014, moved things forward considerably and tests show that the technology used in Euro 6-compliant vehicles has almost eliminated exhaust particulates.

And regulation in this area will only get tighter. From January 2019, all new HDVs manufactured in the EU will come with a declaration of CO2 emissions and fuel consumption. London is introducing an ultra LEZ (ULEZ) in April next year, with many cities planning to follow suit.

Our impact on the environment is an ongoing concern. Heavy-duty vehicles (HDVs) produce around a quarter of CO2 emissions from road transport in the EU and approximately 5% of Europe’s greenhouse gas emissions (that’s more than international aviation or shipping).

Much of the focus on making trucks more environmentally-friendly has been on more efficiency and less pollution. However, fully electric vehicles mean zero pollution. Battery technology is still relatively new in the commercial vehicle industry, but fleet vehicles offer a solid business case for manufacturers. And there are plenty of manufacturers keen to get involved.

However, creating new greener technology is only part of the challenge. There’s also the issue of creating something that is commercially viable, as well as the matter of what to do with the current assets. Sending the majority of existing fleet vehicles to the scrap yard is not what I’d call being eco-minded.

What’s your view on electric trucks?