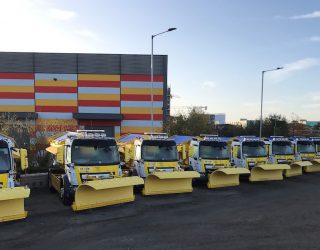 Three contractors that have been awarded framework agreements to keep London’s roads ice and snow-free have turned to Yorkshire-based Econ Engineering to supply them with their gritters.

For the next seven years, 33 Econ vehicles will be located at different points within the capital, ready to mobilise as soon as temperatures plummet.

In October 2020, TfL awarded its roads gritting contracts to Ringway for the Central contract; the North contract to a Tarmac and Kier joint venture, with FM Conway awarded the South contract.

The combined value of all three contracts is estimated to be worth £1.4bn.

Over the last 12 months, the Econ team entered negotiations with all three contracting companies, to determine how it could help support their requirements for winter maintenance vehicles.

Econ Engineering, which has its main manufacturing base in Ripon, North Yorkshire, and has recently opened two engineering hubs in Alloa, Scotland, and the Welsh capital of Cardiff, will produce 85% of winter maintenance vehicles seen on the UK’s roads.

Ringway has purchased 11 brand-new Econ gritters, with all the vehicles signed up on an eight-year repair and maintenance contract – giving the customer peace of mind during the winter with Econ’s premium service cover.

All of the gritters will be run on HVO (hydrogen and Hydrotreated Vegetable Oil) fuel from day one to reduce their carbon footprint.

The fuel is made from renewable and sustainable raw materials and can be used in any diesel engine and is 90% cleaner than using pure red or white diesel.

FM Conway has hired nine gritters following a successful trial of AWT’s Tracking and Navigation system, the firm has also decided to have the vehicles fitted with this market-leading equipment.

The company has designed new routes using the Map A Route (MAR) system showing them the route length, route efficiency and anticipated loads allowing them to select the right vehicle for each route.

All vehicles are also equipped with Direct Vision Standard (DVS) 360-degree visibility to comply with TfL’s safety permit guidance and utilise a five-camera system allowing for better safety for all road users – including cyclists.

Jonathan Lupton from Econ Engineering said: “We are delighted to have been chosen by all three TfL contractors as their winter maintenance vehicle partner of choice.

“This is a significant contract award for us and demonstrates our standing within the highways and transports sector.”

He added: “For more than 50 years, Econ has become an industry leader in the manufacturing of gritters, and our vehicles are used by councils, highways agencies, and road contractors the length and breadth of the UK.

“In addition to selling gritters, we also have an extensive hire fleet, and two of the three TfL framework contractors have chosen to go down this route.”