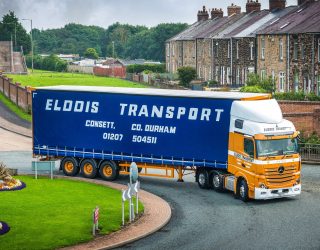 Elddis Transport has marked 50 years in the haulage industry as one of Mercedes Trucks’ most loyal customers by commissioning an exclusive Actros Edition 2 tractor unit with an evocative anniversary livery.

In recent years, the firm has used various specially finished Actros on the road to mark milestones, charity initiatives or customer associations.

The Edition 2 represents a new dimension in comfort, safety and design – with just 400 being built and just 12 coming to UK operators.

The Consett-based operator Elddis Transport’s new flagship has been delivered via Bell Truck and Van with a ‘retro’ livery that mirrors the appearance of Elddis trucks dating from the company’s inception in 1971, with traditional hand-painted signwriting by Hogarth Coachworks, of Birtley.

It is also one of only four vehicles on Elddis Transport’s Mercedes dominated fleet of 150 trucks to bear the name of a member of the company’s founding family – in this case, managing director Nigel Cook’s mother, Pamela.

To complete the eye-catching look, Lawrence David constructed a pair of bespoke curtainside trailers, also in 1971-vintage colours, and the combination rolls on Goodyear tyres.

Despite its traditional finish, there is no mistaking the fact that this truck is bang up to date. The limited-edition model’s sun visor incorporates four additional LED headlights, above which is a deep black panel with Edition 2 lettering.

Other external highlights include an illuminated Mercedes three-pointed star in dark chrome, with a black closed cover, stainless steel entrance steps, three more LED headlights behind the cab, and a chassis frame cover.

Edition 2s are being built as rigids as well as tractor units in 4×2, 6×2 or 6×4 configurations, with GigaSpace or BigSpace cabs, and either 15.6- or 12.8-litre in-line six-cylinder engines with a combined total of eight power ratings.

Elddis chose a 2548 BigSpace version with 476 hp output. Its Edition 2 is now working alongside a further 10 Mercedes Actros 2548 BigSpace units, all of which entered service this month.

Nigel Cook said: “All of our new Actros look smart, but the anniversary unit is amazing. This special unit pays fitting tribute to the closeness and quality of our relationships with the manufacturer and its local representative, as well as to our own history and track record in the industry.”

The Actros Edition 2 raises driver appeal to a new level, thanks to a cab interior that is every bit as eye-catching inside as the exterior.

There is a sliding and tilting sunroof, eight colours of ambient lighting, and a driver’s suspension seat that incorporates climate and massage functions, while at 900 mm-wide and with its own, cosy topper, the comfort mattress is a dream for any driver.

A brushed and polished aluminium badge on the co-driver’s side hails this Edition 2 as ‘One of 400’.

Edition 2 drivers also benefit from the upgraded interactive version of the radical, twin-screen multimedia cockpit, which boasts a larger, 12-inch instrument panel and comes with extra functionality, including satellite navigation, together with Proximity Control Assist, bi-xenon headlamps with a cleaning system and LED taillights.