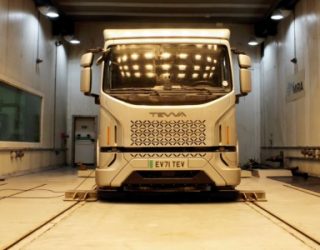 The electric trucks innovator Tevva has revealed that it has opened a base at Europe’s leading mobility research and development location for developing advanced automotive technology.

The base, launched recently at MIRA Technology Park in Nuneaton, Warwickshire, provides the company with proximity to Horiba Mira’s specialist engineering and testing capabilities.

This will include facilities for extensive crash testing, climatic, dynamics and aerodynamic resources.

Great opportunity for the company to develop closer ties

Ken Scott, Tevva’s chief engineer at Tevva, welcomed the move as a great opportunity for the company to develop closer ties with organisations in the same sector.

He said: “Mira Technology Park is second to none when it comes to automotive engineering and testing.

“Our trucks, both now and in the future, will undergo development there.”

He added: “Having a base there makes perfect sense as having a physical presence will help us develop our technologies more rapidly.

“It also means lower overall costs for our research and development.

“This move clearly demonstrates that Tevva is growing at a rate of knots.”

Working at the cutting edge of electric vehicle technology

Having an office on the world-renowned campus also gives Tevva more opportunity to partner with engineers and researchers working at the cutting edge of electric vehicle technology.

It also illustrates Tevva’s intentions as a new OEM and, potentially, will attract even more talent to its rapidly growing team.

Tevva are no strangers to the Mira Technology Park, where the company’s trucks have already undergone extensive trials, including software and climatic testing.

The company is now gearing up for series production of its truck which is due to begin shortly at its main UK base – Tevva London.

Home to more than 40 world-leading businesses

The managing director of Mira Technology Park, Tim Nathan, said the state-of-the-art campus, which is home to more than 40 world-leading businesses from the global automotive industry, is primed for developing world-class vehicles.

He added: “We’re delighted to be supporting Tevva with the development of its pioneering electric truck, providing engineering and test consultancy from concept design through to final validation.

“The unique combination of engineering expertise, advanced testing facilities and prime location of Mira Technology Park in the heart of the UK automotive industry, ensures Tevva can develop and validate their vehicles in one place.”

Tevva has also revealed that it is joining forces with European logistics giant Codognotto to put Tevva’s zero-emission truck through its paces – with the goal of replacing traditional diesel trucks on certain Codognotto routes.

The firm has installed data-logging equipment in various Codognotto delivery vehicles to help set up benchmarks for a ‘Codognotto Duty Cycle’ before Tevva provides prototypes and production vehicles.