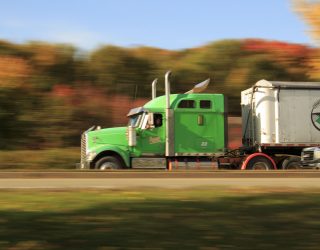 A British trucker who has spent the past decade driving trucking in the US has spoken out about the differences between working in the two countries.

Speaking to Business Insider UK, Mick Flynn, a truck driver from England, explained what he used to do if a snowstorm hit while driving in the UK. He stated: “Most sensible people parked over somewhere and enjoyed a nice cup of coffee.”

Not in the US and Canada. There, drivers are expected to carry on, regardless. Why? Because they are paid by the mile, not the hour.

Whereas rules across Europe state drivers can be behind the wheel for a maximum of 56 hours a week (e.g. nine hours on four days, and ten hours on two days), in the US drivers can drive up to 11 hours per day.

One issue that affects drivers around the world is the lack of detention pay. Drivers can be delayed for hours waiting to unload or load at shipping docks and receive no pay for it.

Shippers and receivers are lax about operations, but it’s drivers who bear the brunt of it. When’s it going to stop?