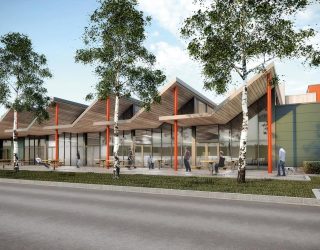 The biggest truckstop in Europe has now opened in Kent and can take up to 650 lorries.

The Ashford International Truckstop is described as ‘state of the art’ and located near to junction J10/10A of the M20.

For many drivers, the truckstop will be their first or last stop as they leave or enter the UK.

Truckers have had to park illegally

Many HGV drivers and haulage companies have been calling for improved facilities in Kent where truckers have had to park illegally in residential roads or on verges.

And since 17,000 freight lorries are travelling every day through Kent, hopes are high that the illegal parking will now cease.

Truckers will get to enjoy new facilities including a bar, games room and a fully fitted kitchen and restaurant that will serve freshly cooked meals around the clock.

There are also Wi-Fi and relaxation booths, toilet and shower facilities, a shop, a gym and a coffee station.

The new truckstop was officially opened by roads minister Baroness Vere who said the new facilities are ‘absolutely fantastic’.

A spokesman for the owners, GSE Property Group, said: “Situated in Waterbrook Park, the award-winning truckstop will be expanded to securely park 650 lorries a night.

“The demand on the existing truckstop has meant that approximately 600 lorries are being turned away each week, which has led to unlawful overnight parking in and around the local community.”

He added: “The new, improved and much larger truckstop will offer a secure place for drivers to stay as well as providing them with catering services, toilets, showers, gym and a recreational area, all on the ground floor. The first floor will house modern offices offering a workplace for local businesses.”

The new facility will replace the existing truck stop and Baroness Vere said that the government is spending £32 million in a bid to find more lorry parks to boost facilities for truckers.

Logistics UK welcomed the opening of Ashford International Truckstop and said that it was a welcome addition for drivers travelling through Kent.

A spokeswoman for the trade association said: “No-one should expect drivers to sleep in cabs at the roadside and not have access to basic hygiene facilities while undertaking important work.”

The truckstop’s owners said that the purpose-built facilities had been designed after consulting with lorry drivers to find out what they need.

Drivers will pay £32.50 to stay from 2 hours and up to 24 hours with a £6 voucher offering a free shower and full use of amenities. There is no fee for staying up to 45 minutes.