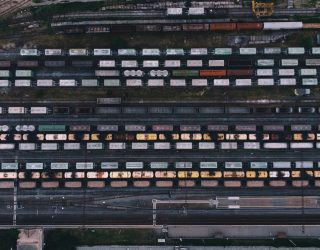 Work with us, not against us.

That’s what Europe’s containerised rail freight industry is saying to those in road haulage. It’s a simple message, but one that comes at a pivotal time.

It’s no secret that road freight has been eating into rail freight market share for some time. Rail freight currently stands at around 11%, with many shippers preferring the reliability and cost savings that come with road haulage. However, if you think the message suggests rail is in a position of weakness – think again.

Between now and 2030, there will be a 30% increase in cargo being transported around the European Union. That is too much for road transport to take on single-handedly. It would be impossible to build the number of roads across Europe needed to handle the freight of the future. However, with a bit of collaboration and rail playing a larger part, these volumes won’t be a problem.

This rise in freight will be down to a number of factors: growth in Asia-Europe container volume; an increase in volume travelling between China and Europe by rail; and a rise in air cargo volume causing airports including Amsterdam’s Schiphol to restrict freighter slots.

Added to this is the growing pressure from regulators to move cargo from the road to rail from an environmental, road safety, and large-volume efficiency perspective.

The best way forward is ensuring road and rail are complimentary of (and not competing against) one another.

Speaking about this to JOC, Jean-Pierre Loubinoux, director general of the International Union of Railways (UIC) said: “Each mode has its own benefit to bring to the market and rail is just one part of the chain of multimodality.

“To succeed, rail and road need to join forces and grow the market together rather than compete for market share. It is in both of our interests and each mode complements the other.”

“We can get to places rail can’t,” Vanderpool explained. “There is an amount of lip service given to cooperation but it is a fact. Trade is increasing and there will be enough cargo going around for all modes to carry.”

However, road haulage is a fierce competitor for rail in terms of innovation. The threat posed by truck platooning, for instance, has not gone unnoticed. It has the potential to make the cost of trucking drop by 30% over the coming decade, but it is also a threat to truck drivers’ jobs and rail too.

Road transport reigns supreme in much of Europe historically. France, for example, places priority on passenger transport instead of rail freight, using EU funding to develop high-speed train networks and showing no signs of reducing the weight of road transport in the country.

Europe’s rail freight trains manage average speeds of 18-30 km per hour, while the average truck speed is 60 km per hour.

In short, road transport in Europe is cheaper and faster, but the future needs to be a combination of road and rail freight – for everyone’s benefit.

Can Europe’s roads and rail work together?