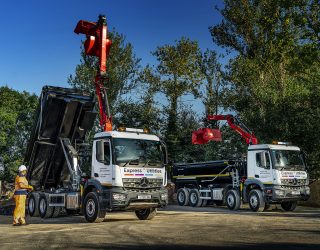 Express Utilities has invested in four new Mercedes Arocs tipper-grabs that have become the first trucks to wear the firm’s new name.

The fast-growing multi-utility connections provider has invested in two eight-wheelers and a pair of six-wheelers – and they have all been smartly finished in the livery of Express Utilities.

Motus Truck and Van supplied the new Aroc trucks to the Harlow-based firm and they are subject to five-year Mercedes Complete Service Contracts.

The new trucks have replaced a quartet of tipper-grabs from the same muscular model range that had been in service since 2018.

Express Utilities was launched in February after being acquired by the BUUK Infrastructure Group, a leading provider of last‐mile multi-utility networks in the UK.

In another break with the past, the operator has purchased its new Arocs rather than leasing them.

All of the trucks have been fitted at Abba Commercials’ production facility in St Helen’s with steel Predator Ultimate tipping bodies and remote radio-controlled Palfinger Epsilon M135L cranes that work with Kinshofer clamshell buckets.

All four were specified with uprated front axles and are powered by 10.7-litre in-line six-cylinder engines with outputs, respectively, of 394 hp and 326 hp.

Two of the new tipper-grabs are operating from a depot in Roydon, Essex, while the others are based in Peterborough and Rochester, Kent.

They are used to collect and deliver stone and aggregates from quarries, and to remove spoil from sites.

Fitted with a full set of Brigade safety cameras

The Arocs, each of which is also fitted with a full set of Brigade safety cameras, represent a substantial investment by the new parent company and reflect its confidence in the future – Express Utilities has been forging ahead strongly since the acquisition and is opening more offices in various parts of the country.

Project Manager for Backfill Reinstatement, Tony Lake, said: “Our last Arocs served us well and the truck is fundamentally well-suited to our requirements, not least because its excellent ground clearance is a big advantage when working in quarries and on rough sites.

“However, another manufacturer was also very competitive. Ultimately, it was Motus Truck and Van’s customer-focused service that swayed us towards Mercedes again.”

He added: “The dealer’s aftersales back-up is first-class too. When inspections and routine maintenance are due on the Royston-based trucks, we drop them off at its Welham Green workshop at the end of the day.

“The driver then goes home in a courtesy vehicle and returns the following morning to collect the vehicle. It all works incredibly smoothly and makes life very easy for us.”