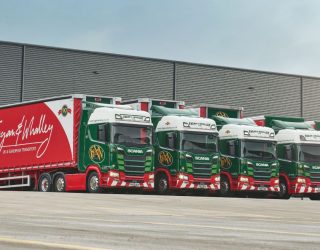 The first haulier in the UK to have every Scania HGV model in its line-up is Fagan & Whalley.

The firm is based in Padiham, Lancashire, and earlier this year, the company undertook a substantial restructure to help facilitate its plans for growth and expansion.

That has led to significant investments in the team and fleet, so they are now the only haulier in the UK – and perhaps Europe – to have Scania L, P, G, R and S-cab configurations out on the roads.

The firm’s operations and strategy director, Daniel Wood, said: “It’s quite exciting, really. It isn’t something we deliberately set out to achieve.

“But a core part of our philosophy has always been to invest regularly in our fleet – to improve safety, boost efficiency, minimise our environmental impact and ensure our drivers are happy in their work.

“Upon reviewing our operations and the vehicles being released by Scania, we decided it was the right time to introduce the new L-cab to the fleet.”

‘Each cab is designed for a specific purpose’

He added: “Each cab is designed for a specific purpose, and this is something we have always taken into account when it comes to managing our fleet.

“The new L-cab is one of the safest on the road and serves really well as an urban delivery vehicle, which definitely meets our current needs.”

The Fagan & Whalley fleet consists of more than 170 vehicles, and they have just added a P-cab, several G-cabs and both rigids and tractor units.

The haulier also has more than 50 R-cabs plus a few S-cabs which feature as our flagship vehicles and are usually awarded to the firm’s longest-service drivers.

The first S-cab to be incorporated into the fleet was purchased back in 2017 as part of their 90th anniversary celebrations and named Doris, after the mother of two of our directors.

Mr Wood said: “We have plans to purchase several more Scania S-cab vehicles in the coming months, all of which will be given to long-serving drivers.

“Our P-cab rigid vehicle is employed in our long-distance distribution operations, whilst our G-cab tractor units are our 24-hour runners, used on local deliveries throughout the day and then used for trunking to the Palletforce hub through the night.

“The Scania R-cab is our standard long-distance fleet vehicle, and we’ve found that it remains to be the best vehicle available for general operations.”

He added: “The Fagan and Whalley brand, heritage and image are all really important to us, and our drivers are equally invested in ensuring the image is maintained and the vehicles are kept looking their best while out and about on the roads of the UK.

“To be the first UK haulier to acquire at least one of every Scania model is, we hope, a reflection of the way we approach our operations and the value we place in our philosophy of continuous investment and improvement.”

In recent weeks, Fagan & Whalley have also celebrated winning trophies at Truckfest Northwest and picking up awards at the Transport News Northern Rewards.