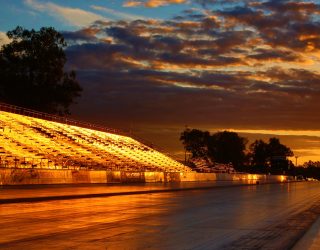 Most people associate track racing with Formula One. The thrill of dozens of high-tech, high-speed, aerodynamic cars reaching speeds of 300 km/h is hard to beat. Or is it…?

For some, top speeds of ‘just’ 160 km/h on a circuit track might not sound that impressive. But when the starting grid is filled with dozens of 5,500kg trucks, the wow factor is hard to ignore.

From the gut-thumping noise and titanic torque to the smell and smoke produced by each vehicle, the very presence of these trucks on the track creates a sense of euphoria among onlookers. If you’ve ever seen the film Duel, you’ll have an idea of what’s involved.

Truck racing might not be as well-known as Formula One, but that doesn’t mean it can’t attract a crowd. Thousands of spectators attend truck racing events across Europe. The FIA European Truck Racing Championship is probably the biggest, most imposing racing series in the world. Founded in 1985, with the current format in place since 2006, races take place across Europe, including at the iconic Le Mans Circuit in France and Nürburgring in Germany.

The first UK truck race took place at Donnington Park in 1984. It was won by an Italian truck driver who, after being first to cross the finish line, reattached his trailer, made his delivery and headed off home again.

Things have moved on since then. To the untrained eye, the outside of the trucks that take part in these races probably look like your bog-standard HGVs, but they are anything but.
Under the bonnet, they are 12-litre, turbo-charged diesel monsters that produce around 1,000bhp and deliver 3,700lb ft. of torque. Some are able to reach 100 mph faster than an entry-level Porsche 911 (yes, that’s from a rolling start, but it’s impressive nonetheless).

Unlike lightweight racing cars, it’s not a case of stripping out vehicles to achieve maximum speed. Each vehicle must weigh a minimum of 5,300kg and each one is modified. The chassis is stiff, drivers sit close to the windscreen, the engine block is further back to redistribute weight, and each is fitted with water-cooled brakes, race shocks and slick tyres that grip to the track.

But even though these hulking machines are bigger than the other vehicles gracing these tracks, racing trucks display a certain amount of finesse and strategy. With a limit on their speed, drivers rely on corner exit speed and continued momentum to complete laps in the fastest time.

There can be up to 23 trucks on the starting grid and races last around 20 minutes, meaning there’s no shortage of action on the track. Overtaking is par for the course, as is aggressive cornering.

There’s something about motorsport that will always seduce drivers and spectators alike – and for many, trucks might be the most captivating of them all.