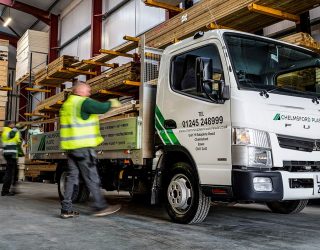 Builders’ merchant Chelmsford Plastic Warehouse bought its first FUSO Canter in 2017, and since then has never wavered in its loyalty to the ruggedly reliable light truck.

The service-led company runs a fleet of eight 3.5-tonne Canters – six work from its headquarters in Chelmsford, Essex, while the remainder are based at its branch in Benfleet.

The latest truck has just been delivered by Motus Truck & Van – a dealer that sells and supports Mercedes-Benz Trucks as well as FUSO trucks since both marques are part of the Daimler Truck family.

And the dealer will also be supplying Chelmsford Plastic Warehouse with another Canter next spring.

‘Bought our first Canter and have never looked back’

Sandra Garratt, the firm’s finance manager, said: “We were running another type of vehicle prior to 2017, but then we bought our first Canter and have never looked back.

“It’s a better truck all round and a lot more reliable, as well as being great value – for the money you get a really good truck.”

She adds: “The 67-plated vehicle we’ve just stood down to make way for the new truck had covered more than 130,000 miles but had given us no trouble at all. We were really pleased too, with the price we sold it for.

“The drivers like them too, not least because the Canter is very manoeuvrable thanks to its tight turning circle – that’s a big advantage when we’re delivering in residential streets or on busy sites.”

Key to the 3.5-tonne Canter’s appeal in a weight segment dominated by vans, are its strength and durability, attributes that owe much to its tough, ladder-frame chassis.

The new 3C13 variant is powered by a fuel-efficient 3.0-litre common-rail turbodiesel that produces 130 hp and torque of 300 Nm with the power delivered via a five-speed manual gearbox.

Its body is the work of KMR Engineering, of Hadleigh, Ipswich.

Established in 2003, Chelmsford Plastic Warehouse specialised initially in plastic products such as facias, soffits and guttering but soon offered customers all their building materials.

The company embarked on a strategy of expansion by adding new lines to its range every year and opening the Benfleet branch in 2011.

In addition to plastic items, the FUSO Canters transport a broad range of timber and sheet materials, lintels, roofing felts and slates, fencing and decking and much more throughout the South-East, as far north as Peterborough.

‘We work our vehicles hard’

Ms Garratt said: “We work our vehicles hard. They venture regularly onto rough building sites to make their deliveries and come in for plenty of abuse.

“But experience has shown that over a three- or four-year life, the Canters stand up to the punishment really well.”

She added that the support from Motus Truck & Van ‘has always been first class’.