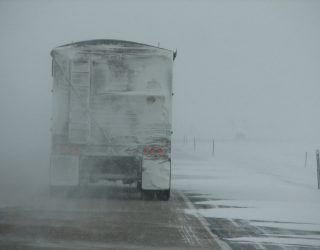 I can’t quite believe it, but gritters are having a moment.

Thanks to the recent spate of bad weather, social media, and some ingenious vehicle naming, the UK’s fleet of salt-spraying gritters have become online sensations.

The Gritter Tracker – an app following the progress of Scotland’s fleet of gritters – was set up by Transport Scotland as a way to inform and reassure the public about the number of gritters treating the roads in snowy conditions.

But the app soon developed something of a fanbase, with many glued to their screens keen to discover the whereabouts of Sir Andy Flurry, Sir Salter Scott, and (my personal favourite) Luke Snowalker as they keep the country moving.

Bear Scotland operates nearly 100 winter vehicles on trunk roads around Scotland. Of those, 45 are 32-tonne eight wheeler spreaders – among the largest in the UK.

The operating company set up competitions asking primary schools to name their local gritters as a way to educate children about how their roads are cleared of snow. As a result, Sprinkles, Mrs McGritter, Sir Grits-a-lot, and Gritty Gritty Bang Bang are now proud members of the fleet. In terms of squads, I’d say this lot are hard to beat. .

The UK has a history of appropriately-named gritting vehicles. In previous years, machines have been named Nicole Saltslinger (after the ex-Pussycat Doll/X-Factor judge), Alexander the Grit and Gritney Spears.

What name would you choose? Suggestions below, please!