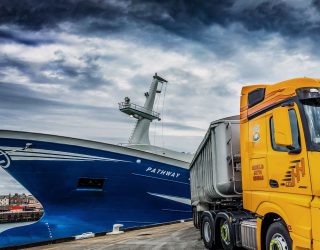 Harbour Haulage became one of the first customers for a premium-specification Actros L when it took delivery of its latest tractor unit from Aberdeen dealer, BLS Truck & Van.

The new truck, which wears Harbour Haulage’s bright yellow livery, is now earning its keep by transporting fish offal and other seafood-related products used in the manufacture of fertilisers and animal feed, to customers throughout Scotland.

Aimed at long-distance hauliers and those engaged in heavy-duty distribution, the Actros L combines previously unseen levels of efficiency with a more relaxed driving and living experience.

‘Cost was certainly a big factor’

Raymond Simpson, a director of the Peterhead-based operator, said: “Cost was certainly a big factor behind my decision to purchase the Actros L.

“Our established supplier’s prices have gone through the roof, and that applies to the servicing as well as the cost of the vehicles themselves.”

He added: “We make a regular run for a major customer that takes the truck under a relatively low bridge on the west coast, near Inverawe.

“The BigSpace would probably get under it, but we wanted to leave a margin so opted for the StreamSpace instead.”

Rewarded for taking such meticulous care of his previous vehicle

Bulgarian driver Ivelin Lesev has been rewarded for taking such meticulous care of his previous vehicle, with the keys to the company’s most powerful truck yet.

Mr Simpson said: “Ivelin spends three or four nights in his cab each week and he’s delighted with the comfort of his Actros L.

“It looks fantastic in our colour scheme, too.

“If the truck performs as well and proves as cost-effective to operate as I confidently expect, then our decision to place this order with Mercedes-Benz will certainly have been vindicated.”

Actros L customers can choose from beautifully finished GigaSpace, BigSpace and StreamSpace cabs, all of which are 2.5m wide and have flat floors.

As well as four- and six-wheeled tractor units with single or double drive axles, Actros Ls are available as 18- and 26-tonne rigid chassis.

All are additionally equipped with a full complement of advanced Mercedes technology.

Harbour Haulage’s 2551 variant pairs one of the more powerful engine options, a 12.8-litre engine that produces 510 hp, with the lowest, Streamspace cab.

Although at 1,970 mm headroom between the seats is 160 mm down on that offered by the range topping GigaSpace, it nevertheless provides a spacious environment for work and relaxation that would be the envy of most truck drivers, not least because the interior has been further enhanced by the fitment of rear wall lockers, a fridge and a microwave.