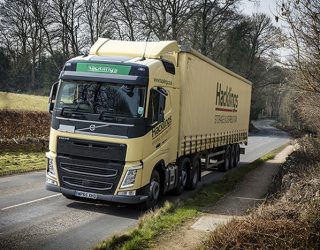 A haulier is extending the use of fingerprint drug testing to support the health and safety for its warehousing and logistics operations.

The move enables testing to be carried out in-house across its sites, including two Palletline depots in Swindon and Cheltenham.

The system is hygienic, easy to use and offers a more dignified and convenient approach to drug testing than conventional tests which require urine or saliva sample collection.

Fingerprint drug test for a range of testing applications

Hacklings will use the fingerprint drug test for a range of testing applications, including pre-employment drug screens, random testing – to promote safety across its depots and warehouses – and for-cause testing, should a situation arise within its logistics and warehouse operations.

“We started renting their test system when we originally moved to the fingerprint method about two years ago.”

He added: “Due to the success of this project, we have now purchased two of Intelligent Fingerprinting’s latest fingerprint drug testing systems.

“We will now be able to screen drivers and machinery operators on-site at any of our depots as we wish, providing us with complete drug testing control and flexibility across our operations.”

‘ADR and hazardous goods pallet network in the UK’

Mr van Jaarsveld said: “As a founding member of The Hazchem Network – the only ADR and hazardous goods pallet network in the UK – safety is paramount across our organisation, embracing not only our employees but also our customers and the public.

“As an early adopter of fingerprint drug testing, the Hacklings team is now really excited to be upgrading to the new system, featuring the DSR-Plus reader.

“It is lighter and smaller than the reader we used previously and will allow us to easily test remotely to support for-cause testing – potentially at a rare road traffic accident involving one of our drivers, or at a forklift collision in the warehouse. While these incidents are thankfully few and far between, the ability to be able to do tests on-site is a major advantage.”

He added: “What is a constant, and a major benefit for us doing in-house testing with Intelligent Fingerprinting, is that the digital screen on the reader displays a positive or negative result for each drug in the test, and these results can also be printed onto a sticky label.

“This provides clarity for both testers and the person being tested, removing the need for interpretation or deliberation of the results.”

Intelligent Fingerprinting‘s Dr Paul Yates said: “Hacklings is one of the longest-standing users of fingerprint drug testing and it is great that they are now investing in our newest technology to extend their use of our innovative method.

“We’re looking forward to seeing how Hacklings will be using our latest system to broaden testing out to other sites and remote locations, proactively encouraging health and safety drug policy adherence.”