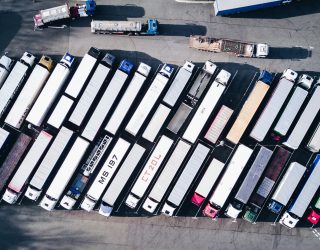 It’s easy to assume that haulage firms are working harder than ever right now to keep supply chains flowing – and indeed some are. But almost half (46%) of haulier’s lorries in the UK have been taken off the road since the coronavirus outbreak started.

The survey from the Road Haulage Association (RHA) paints a worrying picture for the industry – and the body warns that Britain’s supply chain of food and medicine could reach a “crisis point” if firms don’t receive more government help.

There is a fear that hauliers could go under if they are forced to use up their cash resources to pay staff and other overheads, with their vehicles parked up.

Richard Burnett, RHA chief executive, explains why haulage firms are up against it as they try to stay afloat during the crisis.

“An average haulier will make maybe 2% margin, they’ll have two to three weeks cashflow within their business,” he said.

“We’ve got hauliers at the moment who can’t even furlough their staff, because they have insufficient cash to pay those employees.”

He called on the UK government to provide “more radical financial support”, claiming that the loan system “simply doesn’t work at this point in time”.

As the main income for many independent haulage firms is delivering equipment for events, many are struggling to stay afloat because all large gatherings have been cancelled due to the UK’s lockdown, according to the RHA.

Burnett highlighted a major haulier who has been left with no choice but to take its 170-vehicle fleet off the road “with all revenue disappearing overnight”. Drivers have been told to not expect any work for “at least two to three months”.

Not only is a matter of concern for the haulage industry, but supply chain issues could also be felt throughout the country, he warns.

He claims container volume from China has dropped by between 70 and 80% in the past two months, leading to issues with the flow of raw material, retail product and food from across Europe.

Finally, Burnett called for those drivers who are still out there delivering food and medicine to be given more credit and support. “They are taken for granted and have been for years,” he stressed.

The lack of recognition is something we’re trying to address with our #LoveLogistics campaign. We want to show the respect and support these essential workers deserve, not only during these difficult times, but always.