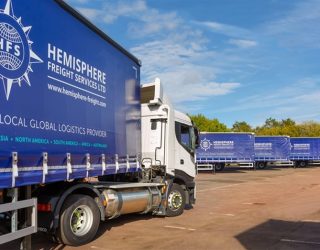 The Ipswich based logistics operation also acquired a new base in Felixstowe.

The new pillarless curtainsiders were acquired through Dawsongroup Truck and Trailer as it refreshes and grows its fleet to meet demand.

The firm says a further four trailers are expected to be ordered later this year.

Boost to the Hemisphere fleet from Dawsongroup

The boost to the Hemisphere fleet from Dawsongroup has been described as ‘ideal’, by transport manager, Paul Milligan.

He said: “The LD trailers are far more stable and sturdier, streets ahead of what we had before, though they were supposedly a premium brand.

“And now Dawsongroup takes care of tyres, MOTs and all servicing and repairs.”

He added: “We pride ourselves on being on top of service timings, but they almost push us with their scheduling.

“We hadn’t done much with them before, though we did take a flatbed trailer on fixed term rental, and that was a good bit of kit. It might have only been one trailer, but they looked after it and us very well, coming to our yard if and whenever we needed them, so it’s a really nice fit now between us.”

The new trailers join on a five-year contract hire arrangement and Mr Milligan says he is already considering adding a further four LD curtainsiders as work volumes continue to grow for the successful East Anglian operator.

He explained: “The great thing about Dawson’s contract hire package is that we get brand-new kit, fully liveried, backed up by nationwide service – and we don’t have to lash out mountains of investment capital to do all that, unlike if we were buying outright.

“And though it’s a five-year deal, Dawsongroup will allow us to refresh and add to them as we need, with minimum fuss and bother.

“It’s a system that effectively takes the worry out of this side of our fleet management and, while we are getting busier and busier, that’s a real bonus!”

In recent years, Hemisphere Freight Services has grown to become an all-encompassing global logistics provider and is now one of the UK’s largest independent providers of logistics solutions across Europe and around the world.

Mr Milligan said: “We were already very busy through our Ipswich warehouse and transport operations, and this latest contract win brought enough work on its own to virtually double that.

“So, the acquisition of another 60,000 sq ft of dockside warehouse at Felixstowe, increasingly one of the UK’s most important ports, was a natural progression for us.”

He added: “It’s a significant addition to our existing 22,000 sq ft packing and warehouse facility at ABP Ipswich, and the 110,000 sq ft of warehousing space at our Ipswich HQ. It allows us the space to handle all current work comfortably and be ready for more.”