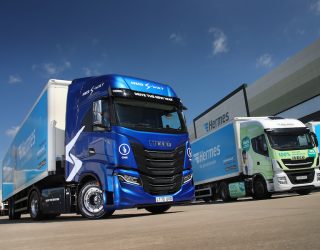 In a bid to reduce emissions from its fleet of trucks, leading consumer delivery specialist Hermes UK is adding 70 Compressed Natural Gas (CNG) fuelled vehicles to its workforce.

Hermes will then have 160 CNG trucks – around 50% of its core hub tractor fleet.

Hermes says it is driven by its commitment to reducing the climate impact and air pollution across the UK’s cities, and that by using alternative fuels makes it the largest UK parcel company fleet to employ CNG vehicles.

Only the popular retailer John Lewis and Partners has a larger fleet.

Hermes’ head of fleet, David Landy, said: “Sustainability is a huge focus for us as we recognise our responsibility as one of the UK’s largest consumer delivery companies.

“We are committed to putting sustainability at the heart of every aspect of our business, through innovative products. As such we were an early adopter of CNG as an alternative fuel and are continuing to increase its presence in our fleet to drive down emissions.”

Each of the new model Iveco S-Way trucks that are being introduced will reduce CO2 emissions by over 80% when compared to a Euro 6 diesel vehicle.

Other benefits of adding CNG vehicles to the Hermes fleet include huge reductions in the air pollution impact from trucks, such as having 70% less NOX, 99% less particulate matter, 90% less non-methane hydrocarbons (NMHC) and 88% less methane.

The new fleet investment follows Hermes’ recent announcement that it is one of the first companies to trial the Iveco Eurocargo, a new 12-tonne vehicle, which also runs on CNG.

Hermes currently uses an electric vehicle fleet for its Central London routes, so if the trial is successful, the company will be able to have an alternative fuels vehicle option for all of its journeys, something that is in high demand from Hermes’ retail clients.

“We are therefore honoured that they will continue to grow this with us, taking the new Iveco S-Way CNG and cementing not just our position as a market leader in natural gas propulsion, but theirs as pioneers in commercial transport decarbonisation.”

Iveco has also revealed that it has launched the Iveco Ambassador programme to give a voice to customers, enthusiasts and partners who share the brand’s values and recognise their actions in these areas.

As a pioneer in natural gas technology, Iveco has started the programme with the aim of raising the profile of natural gas as a fuel and highlight the brand’s commitment to the environment.

The first Iveco Ambassadors have been selected for their belief in natural gas and contribute to protecting the environment by running Iveco LNG and bio-LNG vehicles in their fleet.

Through this project, Iveco aims to give them a voice as they tell the story of their experience with natural gas and the benefits for their operation.

The project is up and running in the markets where natural gas is most widely available, such as Italy, France and the UK.