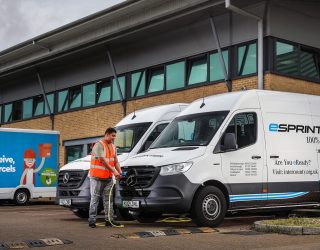 Parcel collection and delivery leader Hermes has underscored its commitment to an emissions-free future by placing a landmark order for 168 fully electric Mercedes-Benz eSprinters.

The zero-emission vans should all be on the road before the end of the year and will be assigned to Hermes’ popular ParcelShops service, which operates from more than 5,000 convenience stores and other locations nationwide.

Hermes’ head of fleet, David Landy, said: “The transition to a zero-emission electric fleet is integral to our environment, social and governance agenda, and we’ve been keen to take the next, major step forward towards this goal.

“However, we are under no illusions. This will not be an easy journey.”

He added: “From a purely operational standpoint, and given the current state of the technology, whichever way you look at it a van with an internal combustion engine beats an electric one hands down.

“Only when it comes to tailpipe emissions does the battery-powered vehicle outshine the diesel. So we know there are constraints and compromises to make, and we recognise that this is going to put extra pressure and increased demands on those colleagues out in our depots who are doing a difficult job, day in, day out.”

The company’s first substantial investment in battery-powered vans follows successful trials from a depot in Enfield, north London, with a pair of eSprinter demonstrators supplied by Intercounty Truck & Van.

The dealer won the Hermes’ tender and will be fulfilling its entire order for Mercedes vans. This also includes 132 diesel-engine Sprinter 315 CDI variants.

Hermes says it is planning to undertake all ParcelShop collections with electric vehicles at the earliest opportunity and has ordered the diesel vans to ‘tide it over’ pending completion of its infrastructure programme and the introduction of next-generation battery-powered variants.

The eSprinters will be the subject of longer Mercedes Finance contract hire agreements, while the Sprinter 315 CDIs will be on one-year terms with Athlon UK, which is owned by Mercedes’ parent Daimler AG.

The firm currently has 450 vehicles in its fleet to service the ParcelShop business, but it is growing, and the supplement demand with rented vehicles during busy periods.

Mercedes eSprinter is powered by a 114 hp electric motor

The Mercedes eSprinter is powered by a 114 hp electric motor that drives the front wheels and has a range of 95 miles on a single charge, which is ample for the majority of urban delivery and last-mile applications; recuperative energy recovered when decelerating supplements the batteries’ output.

The vehicle is based on the L2 (medium length), H2 (high roof) Sprinter.

Its 55kWh high-voltage battery pack is securely mounted beneath the body, so does not impinge on cargo-carrying space.

As a result, the eSprinter’s 11 cubic metres of load volume is identical to that of its diesel-engine, front-wheel drive stablemate, and half a cubic metre larger than its rear-wheel drive equivalent.

However, when specifying diesel Sprinters, Hermes has opted for the long-bodied L3 H2 variant, which offers 14 cubic metres of load volume.

The reduced parcel carrying capacity of the L2 eSprinter compared to the L3 version represents the biggest operational compromise that Hermes will have to make and will be allocating the electric vans to those routes best suited to their smaller cargo areas and restricted range.