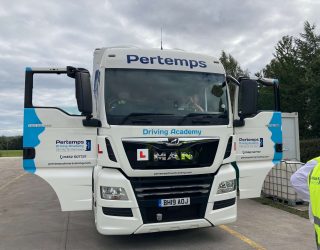 Nearly a quarter of lorry drivers expect to leave the industry in the next three years, according to a survey of HGV drivers.

The research was carried out by Pertemps Driving Academy of more than 2,500 existing HGV licence holders.

In total, 24% of lorry drivers said it was unlikely they would still be driving in three years’ time, with 68% of those saying it was down to poor conditions of life as a lorry driver.

A director of Pertemps, John Poliquin, said: “I literally was bowled over by the starkness of how these people feel.

Earlier this year, more than 10,000 people applied to Pertemps to take up its offer for free HGV driver training which is worth £5,000.

Mr Poliquin said that more needs to be done to keep new driver recruits in the industry.

He said: “I think it’s important to put it out there to people, employers and the public and try and prick people’s conscious to say, value these people for what they do and have done all through the pandemic.

He added: “What this survey shows is that we need to focus on the three Rs – reward, recognition and respect – to attract and retain drivers.”

Always wanted to be a truck driver

Half of those interviewed for the Pertemps survey said they had always wanted to be a truck driver, but 22% of those were no longer working in driving roles, highlighting a ‘leaky pipeline’ in the supply of qualified drivers.

Of the sample of 2,500 HGV licence holders, about two-thirds of them are currently working full-time, while the remainder:

Drivers pointed out the disconnect between signs at the front of stores saying that they won’t tolerate abuse to staff while, in the delivery bay at the back, lorry drivers are treated poorly by clients.

In all, 92% said they did not feel their role was valued enough by the general public and 69% disagreed that pay and conditions were good.

Pertemps’ managing director, Lisa Thurkettle, said: “I am disappointed that 20% of the surveyed drivers no longer work in the industry and what a wasted opportunity that is.

“Out of that, only a small proportion of them might be retired.

“You look at that and think, well that’s a big cohort of individuals that have that skill and ability and are choosing not to do that job anymore, and if we all did something differently could we have retained them?”