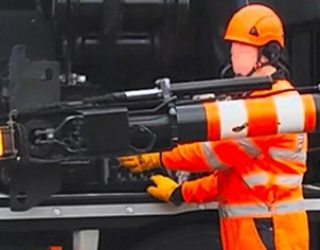 A fatality involving swing-up stabilisers on lorry loader cranes has led the Health and Safety Executive (HSE) to issue a warning about their use.

The move follows an accident investigation into a lorry driver who died after being struck by crane stabiliser legs designed to swing up, rather than retract.

The HSE says it is also investigating another recent fatality that has similarities with the first incident.

After their investigation, the HSE says that the operator had been using the ‘hold-to-run’ levers at the crane’s base but was not watching the stabiliser as it retracted.

The stabiliser leg then struck the operator and was in a horizontal position.

Now, the HSE says it’s important that operators lock swing-up stabilisers into the upright position before they retract or deploy the stabiliser beam.

Their report states: “It is essential that operators fully observe the operation of the stabiliser leg during deployment and stowage.

“Operators must be made aware that the operation of the swing-up function must be separate from the movement of the stabiliser beam (i.e., they should not use both functions simultaneously).”

Operators are now being urged to read the crane’s operation manual and to not stand ‘in the wrong place’.

They add that there ‘can be considerable variation’ between different manufacturer systems and operators must ‘not be positioned in (or lean/reach into) danger zones’ where there is a risk of crushing.

Operators are being warned that if the stabiliser is only partially deployed, there is an increased risk of creating a danger zone where the swing-up stabiliser tilts towards the operator/levers at the crane base.

The Association of Lorry Loader Manufacturers and Importers (ALLMI) has now issued a ‘Safety Alert’ relating to swing-up stabiliser legs.

They said that swing-up stabilisers are usually fitted to lorry loaders to remove the need for widescale relocation of chassis furniture during installation.

These stabilisers have become increasingly common in the last 15 years.

Their operation can be manual or hydraulic and is either via levers at the crane’s base or by remote control, dependent upon specification.

Keith Silvester, the ALLMI’s technical manager, said: “We would strongly encourage industry stakeholders to contact ALLMI for a copy of the Safety Alert.

“It contains important advice for those using swing-up stabilisers, as well as a section covering the ‘Immediate Actions Required’ by all parties, whether involvement with lorry loaders relates to installation, service or repair, training, the running of vehicles or sites, or overseeing lifting operations.”

Mr Silvester added: “The Safety Alert was produced quickly to inform the lorry loader industry as soon as possible, but we will be further researching and discussing this topic with ALLMI’s Technical Standards Committee, after which additional guidance will be provided where applicable.”

The safety alert is now on the ALLMI website for firms with lorry loaders to consult.