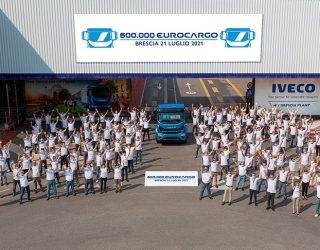 A milestone production figure has been reached for the Iveco Eurocargo truck, the firm has revealed.

This week saw the 600,000th Eurocargo rolling off the line at the Italian firm’s Brescia plant.

The truck has always been made at the plant which employs 1,600.

The Brescia plant director, Marco Colonna, said: “It is with great pride that we are celebrating the production of the 600,000th Eurocargo, whose fourth generation has been enjoying a continued success for many years.

“This milestone vehicle could not be powered by anything else but compressed natural gas (CNG), a tangible reaffirmation of IVECO’s constant commitment to sustainable mobility.”

The Iveco Eurocargo was launched in 1991 and was aimed at being one of Europe’s most innovative vehicles.

It has since gone on to be a bestseller, thanks in part to the modular platform that allows for extensive scope to deliver vehicle customisation projects – without the hefty price tag.

Mr Colonna added: “The significant history that lies behind us now guides us on a path of continuous improvement and innovation which, over the coming years, will see our vehicles evolve to become greener than ever.”

Iveco says it is working every day to reduce the CO2 emissions that are produced by its alternative energy vehicles, and they say they are a pioneer in truck sustainability.

Iveco says it wants to offer the ideal truck solution as the transport industry moves away from internal combustion engines.

Iveco says that natural gas as a fuel not only benefits the economy but also the environment and delivers an effective fuel solution to meet the needs of haulage firms today and in the future.

They say that the gas-powered Eurocargo models are suited to work in towns and cities because they are so quiet.

Part of the success, the firm says, for producing Eurocargo trucks is down to a special integrated production system that was created in 2007.

The aim was to deliver a production process that had no accidents, little waste and very few inefficiencies, as well as zero defects in all of the trucks being produced.

Also, Iveco points to the synergy of the production teams ranging from the chassis assembly to the cab bodywork and the installation of the truck’s transmission, the painting and fitting the interior trim.

Iveco says that it is this attention to detail that gives the Eurocargo truck its edge – not just for its performance but also for its design.

The Brescia plant began life in 1903 as Fabbrica Automobili which was eventually bought by Fiat in 1968.

They started out making cars, including racing cars, before moving into the agricultural sector and delivering industrial vehicles.

Iveco was unveiled in 1975, and in 1991 Brescia was chosen as the new production site for the Eurocargo.

The company says that the truck making plant is committed to sustainability and safeguarding the environment and more than 20,000 m² of solar panels will be installed over the coming months at the site with a bid to cut CO2 emissions by around 1,300 tons every year.